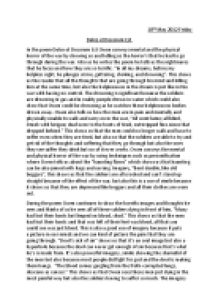 ﻿18th May 2012 Friday Dulce et Decorum Est In the poem Dulce et Decorum Est Owen conveys mental and the physical horror of the war by showing us and telling us the horror?s that he had to go through during the war. Also as he writes the poem he tells us the nightmares that he faces and how they are so terrific. ?In all my dreams, before my helpless sight, he plunges at me, guttering, choking, and drowning?. This shows us the reader that all the thoughts that are going through his mind and killing him at the same time, but also the helplessness in the dream is just like in the war with having no control. ...read more.

Owen conveys the mental and physical horror of the war by using techniques such as personification where Owen tells us about the ?haunting flares? which shows us that haunting can be also joined with hags and cursing. Imagery, ?Bent double, like old beggars?, this shows us that the soldiers are all crocked and can?t stand up straight because of the effect of the war, but also this is a use of simile because it shows us that they are depressed like beggars and all their clothes are worn out. During the poem Owen continues to show the horrific images and thoughts he sees and thinks of as he sees all of these soldiers dying in front of him, ?Many had lost their boots but limped on blood, shod.? This shows us ...read more.

The imagery that Owen is showing us is sound, which makes an effect on the reader, it?s almost like we can hear them making that sound but also death. The last line, ?Dulce et decorum est pro patria mori.? This shows us that Owen must have been a very clever poet but usually men that go to war and are not very high up in the ranking, but because of his intelligence this made him able to rhyme different words that consist of horror and pain during the war, this also shows us that its saying his country is in desperate glory. Overall Owen conveys mental and the physical horror from the thoughts that he has seen but also what he has experienced. By Sam Demilecamps ...read more.