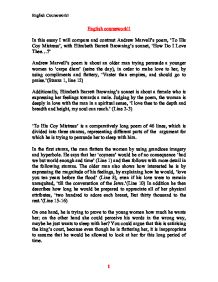 compare and contrast Andrew Marvell's poem, 'To His Coy Mistress', with Elizabeth Barrett Browning's sonnet, 'How Do I Love Thee...?'

English coursework!! In this essay I will compare and contrast Andrew Marvell's poem, 'To His Coy Mistress', with Elizabeth Barrett Browning's sonnet, 'How Do I Love Thee...?' Andrew Marvell's poem is about an older man trying persuade a younger women to 'carpe diem' (seize the day), in order to make love to her, by using compliments and flattery, 'Vaster than empires, and should go to praise.'(Stanza 1, line 12) Additionally, Elizabeth Barrett Browning's sonnet is about a female who is expressing her feelings towards a male. Judging by the poem, the woman is deeply in love with the man in a spiritual sense, 'I love thee to the depth and breadth and height, my soul can reach.' (Line 2-3) 'To His Coy Mistress' is a comparatively long poem of 46 lines, which is divided into three stanzas, representing different parts of the argument for which he is trying to persuade her to sleep with him. In the first stanza, the man flatters the women by using grandiose imagery and hyperbole. He says that her 'coyness' would be of no consequence 'had we but world enough and time' (Line 1) and then follows with more detail in the following stanzas. The older man also shows how interested he is by expressing the magnitude of his feelings, by explaining how he would, 'love you ...read more.

Let me count the ways'(Line 1) she begins to compare her love to religion and emotions rather than physical attributes, 'I love thee freely, as men strive for right.' (Line 7) The imagery she uses to supposedly quantify this love is suggestive of infinity, and a love which has no boundaries, even after the soul is free from the physical body, 'I shall but love thee after death.' (Line 14) Constructive descriptions are always used in this poem, compared to Andrew Marvell's, which also describes the negative issues. Besides Browning's poem having a very romantic meaning, you could question why the woman needs to prove her love for her partner, because she continually mentions and repeats, 'I love thee...' in most of her sentences. She could be indeed counting the ways she loves her partner, however maybe her partner needs reassuring of her love for him. One could argue that, Barrett Browning chose the sonnet form for this poem, for the purposes of contrast; to take something which is supposedly infinitive (her love) and place it in a finite and restricted form (sonnet). Alternatively, people could think different because there are such strict rules governing sonnet writing, (i.e. 10 syllables per line, 14 lines etc) ...read more.

You can picture what the man is describing; but on the other hand, you can tell that he might be misleading the audience to make them believe that he is in love with this woman. Throughout the whole of my essay, I have come to the conclusion, that both poems have many comparisons, similarities and differences. They both describe a form of love between two people. In my opinion, the poem I prefer is, 'To his coy mistress', because it had more of an effect on me, because of the language used. The man comes across as very desperate, but on the other hand with very good charisma. The imagery used is effective, as I could relate and imagine what he is describing. As well as keeping the audience intrigued on what the women will do next, he leaves the ending on a cliff hanger, by not telling on the final decision the women makes! However, I do not dislike the poem, 'How do I love thee...' because it has appropriate language for the concept she is describing. I just think it is rather tedious describing only the optimistic qualities about a person, for the reason that everybody has faults and pessimistic attributes. Furthermore, I didn't find it unique or distinctive from other love poems, since the language and imagery was very similar. ?? ?? ?? ?? English Coursework! 1 ...read more.