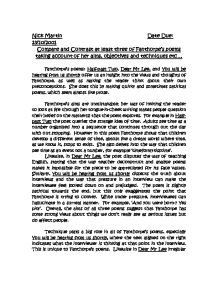 Compare and Contrast at least three of Fanthorpe&amp;#146;s poems taking account of her aims, objectives and techniques etc&amp;#133;

Nick Martin Date Due: 23/10/2001 Compare and Contrast at least three of Fanthorpe's poems taking account of her aims, objectives and techniques etc... Fanthorpe's poems: Half-past Two, Dear Mr Lee, and You will be hearing from us shortly offer us an insight into the views and thoughts of Fanthorpe, as well as making the reader think about their own preconceptions. She does this by making quirky and sometimes satirical poems, which seem almost like prose. Fanthorpe's aims are unmistakable; her way of inviting the reader to look at life through her tongue-in-cheek writing makes people question their belief on the matter(s) that the poem explores. For example in Half-past Two the poet queries the strange idea of time. Adults see time as a number organised into a sequence that continues through out the day with out stopping. However in this poem Fanthorpe shows that children develop a different sense of time, almost like a dream world where time, as we know it, stops to exist. ...read more.

Another variant from the norm in all three poems is the use of brackets or italic writing to represent either private thoughts or another voice. During the three pieces various voices are regularly used; the poet will do this to show either a different viewpoint or the words of a narrator. In the poem Half-past Two voices are used extensively to represent what the child was thinking, what the teacher said and also the narrating. During Dear Mr Lee there seems to be no arrangement in the text at all, however it does resemble a prose letter. However, looking more closely, the poem seems to represent the child's feelings about teaching methods. Voices in this poem seem to consist of the child's thoughts and her teacher's remarks. However in You will be hearing from us shortly the only voice is of the interviewer(s). I imagine Fanthorpe does this so that the reader can add in his or her own response to the observations of the interviewer. ...read more.

In You will be hearing from us shortly the poet could not only be referring to the way that interviewers look upon interviewees, but how candidates assume surreal events will occur in the interview. For example it is very unlikely that an interviewer would comment on the very existence of an interviewee. During Dear Mr Lee Fanthorpe takes on the role of a child and doesn't tell the reader she has done this but instead writes like one. She achieves this by having no indents, no punctuation, random line lengths, no rhythm or rhyme and no paragraphs. For example there is not one full stop until the forty-ninth line. Writing like a child makes the reader think that the poem is being told by a child. To conclude, the three Fanthorpe poems looked at in the Essay help us to understand the way that Fanthorpe regards incidents happening in the world today. It also uses a colloquial tone that provides a jovial piece to read as well as getting a serious point through. All in all the prose-like texts let the reader enjoy an idiosyncratic and meaningful set of poems. ...read more.