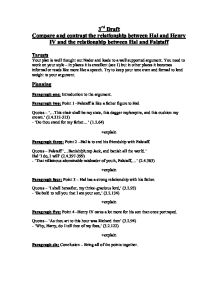 3rd Draft Compare and contrast the relationship between Hal and Henry IV and the relationship between Hal and Falstaff Targets Your plan is well thought out Nader and leads to a well supported argument. You need to work on your style - in places it is excellent (see 1) but in other places it becomes informal or reads like more like a speech. Try to keep your tone even and formal to lend weight to your argument. Planning Paragraph one: Introduction to the argument. Paragraph two: Point 1 -Falstaff is like a father figure to Hal. Quotes - '...This chair shall be my state, this dagger my/sceptre, and this cushion my crown.' (2.4.312-313) - 'Do thou stand for my father...' (1.2.64) +explain Paragraph three: Point 2 -Hal is to end his friendship with Falstaff. Quotes - Falstaff '...Banish/plump Jack, and banish all the world.' Hal 'I do, I will' (2.4.397-399) - 'That villainous abominable misleader of youth, Falstaff,...' (2.4.383) +explain Paragraph four: Point 3 - Hal has a strong relationship with his father. Quotes - 'I shall hereafter, my thrice-gracious lord,' (3.2.93) ...read more.

Hal will 'discard' Falstaff as can be seen from his soliloquy. When Hal decides to make himself '...like bright metal on a sullen ground,' (1.2.172) he knows that he can use Falstaff to portray Hal's ghastly past but then shine like a star as he bursts into kingship. It is for this reason and this reason only that Hal may wish to keep this relationship with Falsftaff, thus using him for his own benefit. Moreover, not long after Hal calls Falstaff a '...villainous abominable misleaders of youth,...' which once again is part of the so called role play but could in fact be the revelation of the truth. It may seem that Hal sees Falstaff as an obstruction on his path to glory however Hal is actually using Falstaff to make himself look bad and then have this sudden reformation and make himself look so much better. So instead he is in fact using Falstaff as a stepping stone across the deep and difficult river, known as the public eye. This is the very reason why Falstaff is trying so hard to maintain a companionship with Hal, only to steal his glory. ...read more.