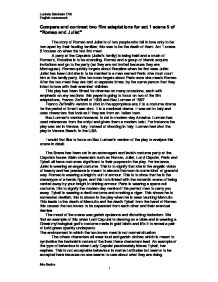 Compare and contrast two film adaptations for act 1 scene 5 of &quot;Romeo and Juliet&quot;.

Compare and contrast two film adaptations for act 1 scene 5 of "Romeo and Juliet" The story of Romeo and Juliet is of two people who fall in love only to be torn apart by their feuding families; this was to be the death of them. Act 1 scene 5 focuses on when the two first meet. A party at the Capulets (Juliet's family) is being held and a crush of Romeo's, Rosaline is to be attending. Romeo and a group of friends acquire invitations and go to the party (as they are not invited because they are Montagues). Romeo quickly forgets about Rosaline when he first sees Juliet. Juliet has been told she is to be married to a man named Paris, she must court him at the family party. She too soon forgets about Paris once she meets Romeo. After the two meet they are told at separate times, by the same person that they infact in love with their enemies' children. This play has been filmed for cinemas on many occasions, each with emphasis on any sections. this paper is going to focus on two of the film adaptations, Franco Zeffirelli of 1968 and Baz Lurman of 1997 Franco Zeffirelli's version is shot in the appropriate era; it is a costume drama for the period of time it was shot. ...read more.

They spot each other through the fish tank that separates the bathrooms. This is possibly meant to symbolise the separation of the two characters because they are from rival families. They are also seen running from Juliet's mother another indication of what they are about to let themselves in for, by eloping without their parents' consent. They are also seen frequently running after each other and being playful. This shows that they are enjoying themselves and is completely different to the behaviour of the parents. Romeo's speech about Juliet before they meet has been cut short but still contains the overall message. This is to compliment the scenes in the film have been set and to keep the pace of the scene fast, and flowing while still getting the point across. This is also reflected in the way that the music has been used to accentuate the feelings in the scene. The music during the main bulk of the scene is fast paced dance music that has a strong pulsating beat and reflects the feeling of hedonism. This then melts into a synthesised version of the song that slides along to show what Romeo is feeling or seeing during his drugged state of mind. It is also punctuated with animal noises from the other guests to make the scene seem slightly threatening and frightening, it also shows the wild and sometimes violent way in which, the characters in the play can react. ...read more.

But the differences in the two plays are great. The time periods of the two film adaptations are immense and many would consider that the older play by Zeffirelli followed the script in a better fashion than Lurman's. However, I find that Lurman's version is aesthetically pleasing to watch because of its fast paced mentality and the passion, which I feel, is correctly amplified in this version. I feel that Lurman's Version of Romeo and Juliet is a better adaptation of the play because it uses symbols of the modern era to explain section of the scene that could not be interpreted in such a way for a different time period or film. For instance Mercutio's speech is explained in Lurman's version as being a drug-induced occurrence. This probably would not have been done in an older time frame or by another director because it would have been as being inappropriate. Another could possibly be the aesthetic nature of the scene it is brightly coloured and is a treat to look at with many different things going on at once most of which is extremely important because this keeps you on the edge of your seat. It is elements like that in an adaptation that keep the story true but adds elements of something different to make it memorable. Lucinda Batchelor D10 English coursework Mrs Bache 1 ...read more.