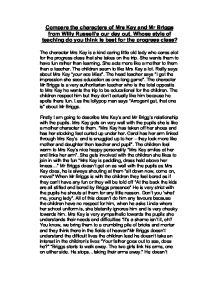 Compare the characters of Mrs Kay and Mr Briggs from Willy Russells our day out. Whose style of teaching do you think is best for the progress class?

Compare the characters of Mrs Kay and Mr Briggs from Willy Russell's our day out. Whose style of teaching do you think is best for the progress class? The character Mrs Kay is a kind caring little old lady who cares alot for the progress class that she takes on the trip. She wants them to have fun rather than learning. She acts more like a mother to them then a teacher. The children seem to like Mrs Kay a lot. Reilly says about Mrs Kay "your ace Miss". The head teacher says "I get the impression she sees education as one long game". The character Mr Briggs is a very authoritarian teacher who is the total opposite to Mrs Kay he wants the trip to be educational for the children. The children respect him but they don't actually like him because he spoils there fun. Les the lollypop man says "Arrogant get, that one is" about Mr Briggs. Firstly I am going to describe Mrs Kay's and Mr Brigg's relationship with the pupils. Mrs Kay gets on very well with the pupils she is like a mother character to them. "Mrs Kay has taken off her shoes and has her stocking feet curled up under her. ...read more.

When they get off the coach to go to the caf� and stretch their legs Mr Briggs insists that the children line up in a neat line and he wants them supervised in the shop Mrs Kay tells him to trust them and let them run free but this backfires because they end up stealing from the shop but Mrs Kay and Mr Briggs don't find out about this "Ooh...leave them...They'll want to stretch their legs and let off a bit of a bit of steam" Mr Briggs on the other hand thinks that things need to be organised and the children just shouldn't be allowed to just go off and do as they please "do you think it was wise just letting the all pour in there at once?" "Well I don't know if these people can be trusted on their own, Mrs Kay" When Mrs Kay surprisingly lets them go to the zoo and she trusts them to behave which is totally against Mr Briggs feelings when they get caught Mr Briggs uses this to warn the children and to question Mrs Kay's methods. My opinion is I think Mrs Kay is right for trusting the children letting them have fun and going and playing but when the steal animals because they children are not going to benefit from being watched all of the time. ...read more.

"She always reminds me as a mother hen rather then a teacher", said Mr Briggs she always sticks up for the children "there are times when I really think your on their side", said Mr Briggs. Mr Kay really feels sorry for them "there's nothing for them to do, any of them; most of them were born for factory fodder but the factories have closed down." Mr Briggs just doesn't have any feeling for them just teaching because it's a job not because he likes it he just wants them educated not for fun. "I think you have to risk being disliked if you're going to do any good for these type of kids". I think that Mrs Kay is the best for the progress class because she has the best qualities and gives them fun. They find learning difficult so if they are having fun they could learn at the same time. She also gives them independence. She is warm to them and they become warm to her. She gives them a feeling of importance. Mrs Kay is the complete opposite she thinks that you should try and be the children's friend. The whole idea of the trip was because none of the children have ever been out of Liverpool and she thought they should be allowed some fun. ...read more.