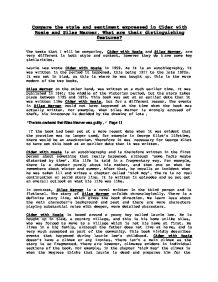 Compare the style and sentiment expressed in Cider with Rosie and Silas Marner. What are their distinguishing features?

Compare the style and sentiment expressed in Cider with Rosie and Silas Marner. What are their distinguishing features? The texts that I will be comparing, Cider with Rosie and Silas Marner, are very different in both style and content, however they do have some key similarities. Laurie Lee wrote Cider with Rosie in 1959. As it is an autobiography, it was written in the period it happened, this being 1917 to the late 1920s. It was set in Slad, as this is where he was bought up. This is the more modern of the two books. Silas Marner on the other hand, was written at a much earlier time. It was published in 1861; the middle of the Victorian period, but the story takes place between 1795 and 1825. This book was set at an earlier date than it was written like Cider with Rosie, but for a different reason. The events in Silas Marner could not have happened at the time when the book was actually written. For example, when Silas Marner is wrongly accused of theft, his innocence is decided by the drawing of lots. 'The lots declared that Silas Marner was guilty.' Page 11 If the book had been set at a more recent date when it was evident that the practice was no longer used, for example in George Eliot's lifetime, there would be an anachronism. ...read more.

She grows up through an 'ideal' childhood and has a perfect personality. In Cider with Rosie, although other personalities are incorporated into the story, we don't really learn enough about their lives and they don't influence Laurie enough to really be classified as fully established characters. For example, Miss Flynn would be classed as a caricature as she is there to represent a free spirit. She is very unpredictable (she commits suicide for example) and does what she wants and lives life how she wants. She is very supernatural and is not too bothered what other people think of her. "I've been bad, Mrs. Er-for the things I must do. It's my mother again, you know. I've been trying to keep her sick spirit from me. She don't let me alone at night." Page 100 This is in keeping with the main theme of the book, freedom. In Cider with Rosie I found that regular events were often elaborated and padded out to make the story interesting. This is successful, as Laurie Lee is very good at descriptions. 'It towered above me and all around me, each blade tattooed with tiger-skins of sunlight. It was knife-edged, dark, and a wicked green, thick as a forest and alive with grasshoppers that chirped and chattered and leapt through the air like monkeys.' Page 9 This quote shows Laurie Lee's descriptive writing skills and how he has managed to make a normal situation, in this case standing in a field, come alive and attractive to read. ...read more.

Page 9 This style of writing is continued throughout Cider with Rosie. Silas Marner has far more elongated passages and consists of far more complex ideas. The language used is very dense and takes more concentration to understand. This is the opening sentence of Silas Marner. 'In the days when the spinning-wheels hummed busily in the farmhouses-and even great ladies, clothed in silk and thread-lace, had their toy spinning-wheels of polished oak-there might be seen in districts far away among the lanes, or deep in the bosom of the hills, certain pallid undersized men, who by the side of the brawny country-folk looked like the remnants of the disinherited race.' Page 1 You can tell the immediate different in the style. This sentence is far longer, uses a lot of punctuation and contains many old fashioned words such as thread-lace, bosom and remnants. The style in which the book is written influences the sentiment in both books. I feel that the style of language in which Silas Marner is written detracts from the warmth that at some points George Eliot is trying to project. This is because the language is so dense it can cause the book to feel a bit cold. To conclude, Cider with Rosie is a light-hearted book about freedom, youth and happiness. It is very descriptive and every day situations are elaborated in order to make them interesting. Silas Marner contains many complex ideas and story lines. It is a fable and the moral is that love is more important than money. These are both very different books, with different perceptions on life. ...read more.