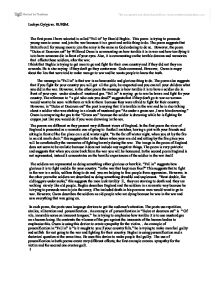 Comparing &quot;Dulce et Decorum est&quot; and &quot;Fall in&quot;. Fall in is effective by persuading men to join the army. However the second poem is effective by talking about the horrific events in the war. Both of the poems are inducing guilt.

The first poem I have selected is called "Fall in" by Harold Begbie. This poem is trying to persuade young men to come and join the war because it is a great and noble thing to do. The poem suggests that Britain's call for young men to join the army is the same as God ordering to do so. However, the poem "Dulce et Decorum est" by Wilfered Owen is commenting on how terrible it is in war and how terrifying it is to have someone die in front of your eyes. Also, it is commenting on the terrible dreams and memories that effects these soldiers, after the war. I think that Begbie is trying to get men to go and fight for their own country and if they did not they are cowards. He is also saying if they don't go they contravene Gods command. However, Owen is angry about the lies that were told to make men go to war and he wants people to know the truth. The message in "Fall in" is that war is an honourable and glorious thing to do. The poem also suggests that if you fight for your country you will get all the girls, be respected and you can tell your children what you did in the war. ...read more.

This suggests that to fight in the war is a noble, selfless thing to do and you are helping to free people from oppression. However, in the other poem the soldiers are described as doing something dreadful and unpleasant. "Bent double, like old beggars under sacks," this suggests the men look terribly ill, they are starving to death and they are walking slowly like old people. Begbie describes England and the soldiers in a romantic way because he is trying to persuade men to join the army, if he included death in his poem no men would want to go to war. However, Owen describes the soldiers as old people who are dying because he was in the war and saw everything that was going on. In each poem, the poets uses language devices to get the audience's attention. The poets use repetition, similes, alliteration and personification . An example of personification in "Dulce et decorum est" is " Of vile, incurable sores on innocent tongues," he is trying to emphasise how terrible it is to use mustard gas on a human being. He contrasts the vileness of the gas against the innocents of the human bodies to emphasise this. Owen is using this device to create sympathy for the victim. . An example of personification in "Fall in" is "is it naught to you if your country falls." ...read more.

"Fall in" is divided into four stanzas with eight lines long, using the ABAB rhyming scheme. In this poem each stanza starts with a rhetorical question, an example of a rhetorical question is "Will you send a strangled cheer to the sky and grin till your cheeks are red?" this quote is trying to make people think; it also means will you be cheering with guilt inside you or will you cheer with embarrassment. However the other poem is divided in to 3 stanzas, first two stanzas are eight lines long while the last stanza is 12 lines long. Owen uses the ABAB rhyme scheme which creates a regular rhythm similar to marching soldiers. He uses iambic pentameter which is 10 syllables in the line, unstressed and stressed which is meant to mimic a heart beat. "Fall in" is effective by persuading men to join the army. However the second poem is effective by talking about the horrific events in the war. Both of the poems are inducing guilt. The first poem is inducing guilt by talking about the consequences if you don't go to war. However, the other poem is inducing guilt to the government . I think the most effective poem is "Dulce et decorum est" because it is so descriptive and emotional. 2 Lachyn Gylyjova. 9L/9SM. ...read more.