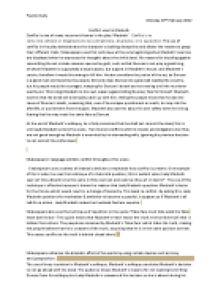 Conflict is one of many recurrent themes in the play Macbeth.

﻿Pauline Sady Monday 13th February 2012 Conflict used in Macbeth Conflict is one of many recurrent themes in the play ?Macbeth?. Conflict is to come into collision or disagreement; be contradictory, atvariance, or in opposition. The use of conflict in the play demonstrates the character?s clashing viewpoints and allows the readers to grasp their different traits. Shakespeare uses this technique at the very beginning when Macbeth?s worries are displayed when he expresses his thoughts about the sinful deed. His reasons for deciding against committing the act include reasons spurred by guilt, such as that Duncan is not only a great king, of whom Macbeth is supposedly a loyal subject, but a guest in Macbeth?s house, and Macbeth?s cousin, therefore it would be wrong to kill him. He also considers the justice of the act, as Duncan is a good man and loved by the people. Not only does Duncan do a good job leading the country, but his people would be outraged, weeping for Duncan?s death and not resting until the murderer was found. This brings Macbeth to his next reason against killing Duncan; fear for himself. Macbeth worries that the deed will eventually catch up with him, letting the people know that he was the cause of Duncan?s death, reasoning that, even if he escapes punishment on earth, he may risk the afterlife, or punishment from the gods. ...read more.

The use of irony is evident in Macbeth?s soliloquy. Macbeth?s soliloquy concludes Macbeth?s decision to not go ahead with the deed. The audience knows Macbeth?s reasons for not wanting to kill King Duncan from his soliloquy but Lady Macbeth is unaware of his decision as she is absent during his soliloquy. When she enters the scene, Macbeth ends his soliloquy and quickly changes the subject by saying ?How now! What news?? Macbeth immediately interacts with his wife, not giving her the chance to question him about his previous activity, allowing him to keep his thoughts private throughout the conversation. Lady Macbeth is unaware of her husbands? true feelings. Juxtaposition is also present in the play Macbeth. Shakespeare uses the dramatic technique in the quotes ?If we should fail?? & ?We?ll not fail.? By asking his wife about the consequences they may face if they fail the deed, Macbeth shows tremendous anxiety. The question sums up all of his fears & worries. Macbeths conscience appears, it is blatant he fears the consequences that he might have to face if they are to fail. On the other hand, Lady Macbeth is confident; she believes that failing isn?t an option. ...read more.