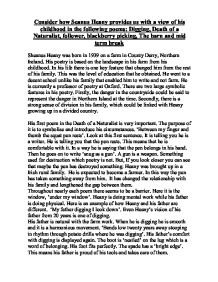 Consider how Seanus Heany provides us with a view of his childhood in the following poems: Digging, Death of a Naturalist follower, blackberry picking, The barn and mid term break

Consider how Seanus Heany provides us with a view of his childhood in the following poems: Digging, Death of a Naturalist, follower, blackberry picking, The barn and mid term break Sheanus Heany was born in 1939 on a farm in County Derry, Northern Ireland. His poetry is based on the landscape in his farm from his childhood. In his life there is one key feature that changed him from the rest of his family. This was the level of education that he obtained. He went to a decent school unlike his family that enabled him to write and not farm. He is currently a professor of poetry at Oxford. There are two large symbolic features in his poetry. Firstly, the danger in the countryside could be said to represent the danger in Northern Island at the time. Secondly, there is a strong sense of division in his family, which could be linked with Heany growing up in a divided country. His first poem in the Death of a Naturalist is very important. ...read more.

'My father digging I look down'. Even Heany's vision of his father from 20 years is one of digging. His father is natural with the farm work. When he is digging he is smooth and it is a harmonious movement. 'Bends low twenty years away stooping in rhythm through potato drills where he was digging'. His father's comfort with digging is displayed again. The boot is 'nestled' on the lug which is a word of belonging. His foot fits perfectly. The spade has a 'bright edge'. This means his father is proud of his tools and takes care of them. 'By God, the old man could handle a spade just like his old man'. 'By God' is a sign of Heany's admiration for his father. 'Like his old man' gives you a sense of inheritance. Farming has been done from many generations ago and this shows how Heany is different. Heany used to carry his grandfather milk while he was digging. He writes how it was done without care and it manifests his feeling of inadequacy. ...read more.

It is also about Heany's literal following of his father around the field as well as his trying to emulate his father. His father is very skilled in what he does. Farming is not something easy. It is more like an art, which his father has mastered. His father works with a horse plough. This is extremely hard and requires a true understanding of farming. What's more, is that he is able to control the horses without an ounce of effort. 'The horses strained at his clicking tongue'. This is further proof of his father's harmony with farming. Heany realises this and admires him for it. 'An expert'. Furthermore he could roll over the sod perfectly with a single pluck. He seems to even have a harmonious coexistence with his tools. 'The sod rolled over without breaking, at the headrig. With a single pluck'. The father and the horse seem to have an understanding. 'The sweating team'. They are a team. This means they work together and are almost one. Also, they are sweating which shows how physical it is. They would precisely plough the furrow, which is another representation of the father's skill and knowledge of farming. 'Mapping the furrow exactly'. ...read more.

The theme of childhood features heavily within Heaney's works, so this question is very broad. However this candidate constructs a good response and avoids becoming muddled as is common when so many poems are specified. Thus, this essay is clear ...

The theme of childhood features heavily within Heaney's works, so this question is very broad. However this candidate constructs a good response and avoids becoming muddled as is common when so many poems are specified. Thus, this essay is clear and well-reasoned whilst exploring how this theme presents itself.

Generally very good. This candidate demonstrates a wide thematic understanding of Heaney's works, whilst being able to specify certain examples using both quotations and reference. The way in which this essay emplores the theme of childhood is good because it links poems together as opposed to discussing them individually.

Perfectly fine. Spelling, punctuation and grammar are all good. Equally, the general structure of the essay is high as well as this candidates quality of written communication.