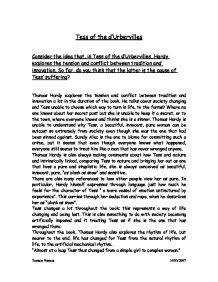 Consider the idea that, in Tess of the d'Urbervilles, Hardy explores the tension and conflict between tradition and innovation. So far, do you think that the latter is the cause of Tess' suffering?

Tess of the d'Urbervilles Consider the idea that, in Tess of the d'Urbervilles, Hardy explores the tension and conflict between tradition and innovation. So far, do you think that the latter is the cause of Tess' suffering? Thomas Hardy explores the tension and conflict between tradition and innovation a lot in the duration of the book. He talks about society changing and Tess unable to choose which way to turn in life, to the farms? Where no one knows about her secret past but she is unable to keep it a secret, or to the town, where everyone knows and thinks she is a sinner. Thomas Hardy is unable to understand why Tess, a beautiful, innocent, pure woman can be outcast so extremely from society even though she was the one that had been sinned against. Surely Alec is the one to blame for committing such a crime, but it seems that even though everyone knows what happened, everyone still seems to treat him like a man that has never wronged anyone. ...read more.

"Almost at a leap Tess thus changed from a simple girl to complex woman." She is not used to all the change; she is used to tradition and is usually one with nature. Tess is no longer part of the rural land, she is no longer one with nature, but is one with the machines. As hard as she tries to fight it, she gives in and leaves tradition behind, becomes another woman. Thomas Hardy always seems to be making the point that traditional life is being over-run by modern life and machinery. Thomas Hardy portrays the change in society as a bad thing, as if the two worlds are colliding and one of them is going to win, he just hopes it's not the modern world that does. Alec seems to come over as the modern man, he has "freshly cut gardens" that only seem to be there for a decorative purpose, a "modern household", that is bigger than anything Tess is used to and he has lots and lots of money. ...read more.

Tess seems uneasy about it. The train is new machinery coming into a rural world and the passage in the book shows that very well. 'The light of the engine flashed for a second upon Tess Durbeyfield's figure, motionless under the great holly tree. No object could have looked more foreign to the gleaming cranks and wheels than this unsophisticated girl...' This also signals the hanging of Tess at the end. Tess is a very clever girl but is only "unsophisticated" in the eyes of the new, advanced world. She is un-used to all the machinery and is a stranger to the modern technology. In conclusion, Thomas Hardy explores the conflict between tradition and innovation by comparing the old with the new from his point of view. He does not like the modern stranger that seems to be creeping up on the old traditions. He feels that Tess is being victimized by society because they do not understand the pain she is feeling. ?? ?? ?? ?? Tamsin Francis 14/03/2007 ...read more.