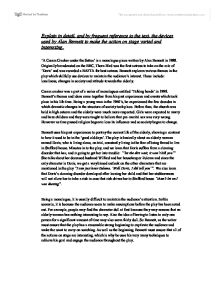 Cream Cracker - Explain in detail, and by frequent reference to the text, the devices used by Alan Bennett to make the action on stage varied and interesting.

Explain in detail, and by frequent reference to the text, the devices used by Alan Bennett to make the action on stage varied and interesting. 'A Cream Cracker under the Settee' is a monologue piece written by Alan Bennett in 1988. Originally broadcasted on the BBC, Thora Hird was the first actress to take on the role of 'Doris' and was awarded a BAFTA for best actress. Bennett explores various themes in the play which skilfully use devices to maintain the audience's interest. These include: loneliness, changes in society and attitude towards the elderly. Cream cracker was a part of a series of monologues entitled 'Talking heads' in 1998. Bennett's themes and ideas came together from his past experiences and events which took place in his life time. Being a young man in the 1960's, he experienced the few decades in which dramatic changes in the structure of society took place. Before then, the church was held in high esteem and the elderly were much more respected. Girls were expected to marry and have children and they were taught to believe that pre-marital s*x was very wrong. However as time passed religion began to lose its influence and so society began to change. ...read more.

This is why Bennett uses certain techniques as 'conversation starters' so that the character Doris will be able to talk about different things whilst keeping the audience engaged. An example of this is the props which are used; "she looks down at the wedding photo on the floor." The photo frame is one of the most important props because that is what starts the conversation about her deceased husband. The prop makes it more interesting than Doris just sitting there and talking about Wilfred. Other props include the cream cracker. When she spots the cream cracker she begins talking about Zulema and how she doesn't clean very well. "She's not half done this place, Zulema" Again through this prop a conversation begins and we get to see Doris's cleanliness obsession. This technique helps the audience to understand she has this obsession because it wouldn't be very interesting if Bennett made her say "I have a cleaning obsession". Another technique Bennett uses as conversation starters is the place she is at. As mentioned previously, the place she is at influences her speech: "*she looks at where the pram was* I wanted him called John." Similarly, the place allows her to talk about different things and lets the audience see where the idea of what she talks about came from, therefore making it more engaging. ...read more.

Although Wilfred is dead she talks as if he is still alive and by 'we're cracked' she is referring to their relationship and how it wasn't going well and how they are now separated. Another example is near the very end of the play. Bennett doesn't reveal the ending so it is up to the audience to decide, however it is written in a way that may suggest that she does indeed die. "I wish I was ready for bed..." my interpretation of that line is that she is saying she wish she was ready for death. "Never mind. It's done with now, anyway" here she talks as if it is the end, even though we as the audience aren't fully sure. Overall Bennett makes this play entertaining and interesting for the audience by using various techniques and devices. The reason why these devices are effective and the play engages the audience is because Bennett cleverly finds a correct balance between the wide ranges of techniques he uses. He uses fairly simple devices such as pauses, alongside more complex devices such as subtext and naturalistic dialogue. He even writes his play in a way that will enable the actress to choose how some lines can be said. I personally think that this was a very captivating play and Bennett achieved his goal of making the action on stage varied and interesting. ...read more.

The essay raises some valid points concerning the devices Bennett uses and some well-chosen quotations are used. The introduction prepares us well for the topic but then the essay takes too long to engage with the analysis; some of this irrelevant material needs to be cut. Some points are inadequately developed and supported.

Paragraph construction is quite well managed and sentence construction and lexis are mostly competent, with a few lapses.