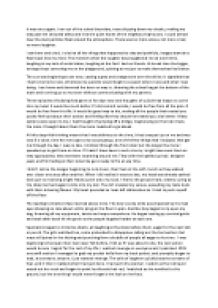 Creative writing - write about a time you panicked

﻿It was once again, I ran out of the school boundary, tears dripping down my cheeks, making my way past the secluded alleys and into the quiet haven of the neighbouring houses, I could almost hear the dust particles float around the atmosphere. There was no more voices, not more cried, no more laughter. I sat there and cried, I cried at all the things that happened to day and painfully, images started to flash back into my mind. The moment when the tougher boys laughed at me at lunch time, laughing at my lack of social status, laughing at the fact I had no friends. At break time the bigger, stronger boys cornering me on the playground, spitting at me just to make themselves feel better. The sun was beginning to set now, casting a grey and orange tone over the skline. ...read more.

All this deep-felt thinking meant that I was oblivious to the time, it had creeped up on me and was now 5 o?clock, time for me to go to my scouts group, one of the few things that I enjoyed, that got me through my day. I was no late. I strolled through the front door but the longer the more I speeded up to get there on time. If I hadn?t have been in such a hurry I might have seen them as they approached, they members swarming around me. They with their gelled up hair, designer jeans and fist trailing at their sides like guns ready to fire at any time. I didn?t notice the danger beginning to lurk closer, their feet on the soft crunch as they walked ever closer one step after another. ...read more.

The girls watched too, some pretended to disapprove calling out the tormentors. But most still joined in the kicking and punching form a huddle of people all eager to hurt me. I was beginning to feel pain like I had never felt before, I felt as if I was about to die, the next action would be one I regret for the rest of my life. I wanted revenge on everyone and I panicked. With one swift motion I managed to grab my pocket knife from my back pocket, and promptly began to stab, at someone, anyone, I just wanted revenge. The yells of laughter quickly became screams of fear, and it then I realised what I had just done. I had just kill a women. I watch as the red liquid oozed out her neck and began to paint her blonde hair red, I watched as she tumbled to the ground, but the one thing I would never forget is the look on her face. ...read more.