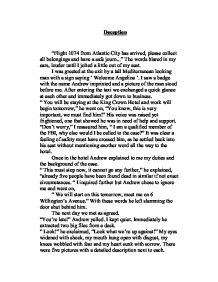 Deception "Flight 1074 from Atlantic City has arrived, please collect all belongings and have a safe journ..." The words blared in my ears, louder until I jolted a little out of my seat. I was greeted at the exit by a tall Mediterranean looking man with a sign saying ' Welcome Angelina '. I saw a badge with the name Andrew imprinted and a picture of the man stood before me. After entering the taxi we exchanged a quick glance at each other and immediately got down to business. " You will be staying at the King Crown Hotel and work will begin tomorrow," he went on, "You know, this is very important, we must find him!" His voice was raised yet frightened, one that showed he was in need of help and support. "Don't worry," I reassured him, " I am a qualified member of the FBI, why else would I be called to the case?" It was clear a feeling of safety must have crossed him, as he settled back into his seat without mentioning another word all the way to the hotel. Once in the hotel Andrew explained to me my duties and the background of the case. " This must stop now, it cannot go any further," he explained, "already five people have been found dead in similar if not exact circumstances. ...read more.

I looked at him sternly; he had no right to upset her in such a way. "Don't worry Mrs Barnett take all the time you need," I said. "What are the names of your two sons?" Andrew went on, "and where were they both living?" Tears ran from her eyes, "Ian was," she paused, "Ian lived here with me, and he looked after me. The other one, Michael he's called, although he didn't like the name. He was the aggressive one. My late husband and I adopted him when he was three years old. Nobody knows where he is." Soon after we found ourselves leaving. On route to the Brown household I received a call. We were told to leave immediately and head for the office, it was an emergency. A police car picked us up and dropped us on Willington's Avenue. We entered the office in a rush and to my surprise we sae a young man sitting there anxiously. He was wearing a white shirt with dried blood on his cuffs and on his fingertips. I felt sick. Yet another murder had been committed. He was winning. I looked at this man sitting low in his seat with his head bowed down and his hands firmly crossed on the table; his appearance was shabby and dirty. ...read more.

I just want to inform you that our next step of action will be to limit th..." My mind wandered off. I saw in the far distance a face that I recognised. "Won't we Angelina?" Andrew said. Who was that? Who was that woman? I had seen her some where before! Who was she? Who was she? " ANGELINA!" Andrew yelled, "ARE YOU WITH US ?" " Err...Yes that's right, we will!" I said hoping that I had answered correctly, not even knowing what he had said. I said my last goodbyes to Hart and watched him leave. He walked over to the elevator with his suitcases and left. Andrew had dismissed us and I rushed out of the office still trying to figure out who the lady was. Suddenly I remembered, Mrs Barnett! What was she doing here? I followed her down the stairs until finally I caught up with her. " Mrs Barnett," I panted, trying to catch my breath after running after her. " Yes dear?" she replied, lifting the sunglasses up, revealing her eyes. " May I be of any to you?" I inquired. "I am here to speak to Andrew regarding my son, "she went on, and "perhaps you may know where I could find him?" " Sure he is on the floor above this, room 401," I explained She began heading for the stairs. ...read more.