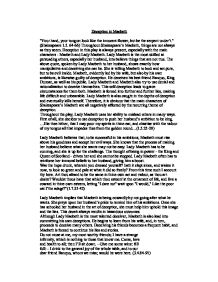 Deception in Macbeth "Your hand, your tongue: look like the innocent flower, but be the serpent under't." (Shakespeare 1.5. 64-66) Throughout Shakespeare's Macbeth, things are not always as they seem. Deception in this play is always present, especially with the main characters - Macbeth and Lady Macbeth. Lady Macbeth is the most skilled at persuading others, especially her husband, into believe things that are not true. The above quote, spoken by Lady Macbeth to her husband, shows exactly how manipulative and deceiving she can be. She is telling Macbeth to look and act pure, but to be evil inside. Macbeth, evidently led by his wife, but also by his own ambitions, is likewise guilty of deception. He deceives his best friend Banquo, King Duncan, as well as his public. Lady Macbeth and Macbeth also try to use denial and rationalization to deceive themselves. This self-deception leads to grave circumstances for them both. Macbeth is forced into further and further lies, making life difficult and unbearable. Lady Macbeth is also caught in the depths of deception and eventually kills herself. ...read more.

This deceit always results in hazardous outcomes. Although Lady Macbeth is the most talented deceiver, Macbeth is also lead into committing his own deceptions. He begins to learn from his wife, and, in turn, proceeds to deceive many others. Deceiving his friends becomes a frequent habit, and Macbeth is forced to continue his lies and stories. Do not muse at me, my most worthy friends; I have a strange infirmity, which is nothing to those that know me. Come, love and health to all; then I'll sit down. - Give me some wine: fill full: - I drink to the general joy of the whole table, and to our dear friend Banquo, whom we miss; would he were here. (3.4.84-91) This falsehood is evident, as Macbeth is trying to fool his dinner guests about the reasons for his strange behaviour. Pretending that everything is fine eventually does not work, and as the play continues, so does the deception on many different levels. Deceiving others may seem difficult, but deceiving oneself leads to even bigger problems. ...read more.

Macbeth becomes imprisoned by his illusions caused by the build up of denial and self-deception. Banquo's ghost is an example of these illusions. "...Take any shape but that [Banquo's] and my firm nerves shall never tremble: or , be alive again..."(3.4.103-104) Macbeth's inner struggle is coming out and, because his mind is in such a state, he can no longer control his behavior. Like his wife, Macbeth's own inner deception has made him crazy. Macbeth goes from being a noble warrior with honest ambition, to someone that cannot even control his own thoughts anymore, due to all of the deception. From the end results of the play, we can clearly see how deception ruins lives. Shakespeare shows the audience that misleading others - and oneself, is not honorable nor the way to get ahead. Lady Macbeth's ability to seduce her husband into having immoral thoughts, leading to immoral actions to gain power, does not pay off. Macbeth's learned evilness and deception also affects him negatively, and the quest to be king is tragic. Self-deception is the worst kind of deceit, as we can see that the guilt becomes overwhelming, causing insanity. Evil deception of any kind is clearly harmful and a valid moral lesson can be taken from this play. ...read more.