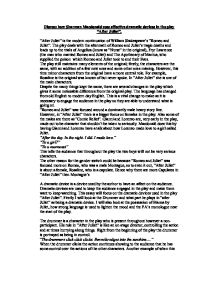 Discuss how Sharman Macdonald uses effective dramatic devices in the play "After Juliet". "After Juliet" is the modern continuation of William Shakespeare's "Romeo and Juliet". The play deals with the aftermath of Romeo and Juliet's tragic deaths and leads up to the trials of Angelica (know as "Nurse" in the original), Fryr Lawrence (the man who married Romeo and Juliet) and The Apothecary of Mantua, who supplied the poison which Romeo and Juliet took to end their lives. The play still maintains many elements of the original; firstly, the characters are the same, with an addition of a few new ones and some other ones missing. However, this time minor characters from the original have a more central role. For example, Rosaline is the original was known of but never spoke. In "After Juliet" she is one of the main characters. Despite the many things kept the same, there are several changes in the play which gives it some noticeable difference from the original play. The language has changed from old English to modern day English. This is a vital change to make as it is necessary to engage the audience in the play so they are able to understand what is going on. ...read more.

Benvolio and Rosaline will get together but tears apart the moment by the click, click, click. The drummer may cause the audience to feel confused too. They never know why he is there and why he does what he does. As a result of the confusion the audience would want to watch to find out the purpose of the drummer. Though the play wouldn't suffer much harm if the drummer was gone, he still manages to entice the audience. Therefore the drummer is a successful at being a dramatic device. During the play Bianca gets possessed by her deceased cousin, Juliet. Juliet says that she doesn't want Rosaline to take Romeo's love away from her by kissing him. "Don't let her take the taste of my lips from his mouth." The reason this I in the play is that so far in "After Juliet", is that Juliet is portrayed as being a spoilt brat by Rosaline. "You were too small, too pretty, too rich, Too thin, and too much for me to cope with. "Spoilt" is the work which springs to mind Though I don't want to speak ill of the dead." ...read more.

The speech also informs the audience about what is going to happen. The PA is just like the Prologue is Shakespeare original. The PA is a moderately successful as a dramatic device because he allows the audience to engage in the play from the start, without having to know anything prior to viewing it. In conclusion, Sharman Macdonald uses dramatic devices in "After Juliet" many times. The most effective one I looked at was The Drummer, a pivotal character in the play and one which makes the biggest impact. The reason for this that he controls what goes on. Juliet's present in "After Juliet" is also a good dramatic device as it is quite shocking and surprising to have Juliet in the play, considering she's dead. Gianni and Lorenzo are two characters in the play which aren't too essential, however act as a good dramatic device. The PA acts as an informer about what is going to happen and sets the scene. His part in "After Juliet" is a small one and not vital to the play, however his small speech may help a few members of the audience understand they play. Personally, I didn't enjoy reading the play. I felt it didn't do any justice to Shakespeare's "Romeo and Juliet". Unlike the original, "After Juliet" didn't seem to cover much. ...read more.