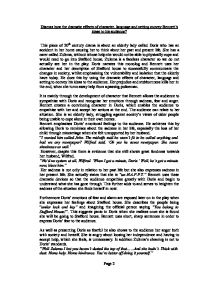 Discuss how the dramatic effects of character, language and setting convey Bennett's ideas to his audience?

Discuss how the dramatic effects of character, language and setting convey Bennett's ideas to his audience? This piece of 20th century drama is about an elderly lady called Doris who has an accident in her home causing her to think about her past and present life. She has a carer called Zulema, without whose help she would not be able to physically cope and would need to go into Stafford house. Zulema is a faceless character so we do not actually see her in the play. Doris narrates this monolog and Bennett uses her character and her description of Stafford house to successfully communicate the changes in society, whilst emphasising the vulnerability and isolation that the elderly have today. He does this by using the dramatic effects of character, language and setting to convey his ideas to the audience. Her prejudice and stubbornness kills her in the end, when she turns away help from a passing policeman. It is mainly through the development of character that Bennett allows the audience to sympathise with Doris and recognise her emotions through sadness, fear and anger. Bennett creates a convincing character in Doris, which enables the audience to empathise with her and accept her actions at the end. ...read more.

I'll say. Don't Stafford house me, lady. This cream cracker was under the settee." Zulema is in a powerful position and has a great deal of control and influence over Doris' life and future. Bennett uses her bossy attitude for the audience to see that this is for the purpose of helping and protecting Doris, which further highlights Doris' vulnerability. Although Zulema's character is faceless in the play, her presence allows the audience to see the independence of Doris' character, which is paramount in enabling the audience to understand Doris' actions at the end of the play that result in her death. Zulema also plays a part in making the audience aware of Doris' obsessive qualities with cleanliness and hygiene. Bennett achieves this through Doris' objections to her inadequate cleaning. Consequently the audience can recognise Doris' obsessive qualities with cleanliness and hygiene through the way in which Bennett constantly has Doris referring to the importance of hygiene. Bennett uses this effect to show Doris as being very clean, in contrast to how she sees the elderly in Stafford house. This also highlights to the audience that this lady has got great determination and she does not want to loose the independence she has got. ...read more.

The effect this has is to increase the audience's pity for Doris but may also lead them to question why she feels so strongly about staying in her own home. The dramatic effects used in the play are enhanced by Bennett's use of pauses and breaks of black to show the time in which Doris has been there. This gives the audience an opportunity to think about the previous scene and can therefore relate to what she is thinking. This increases the audience's sympathy and empathy with Doris. In conclusion, through the use of character, language and setting, Bennett has successfully conveyed his ideas to the audience. He has developed a character in Doris with which the audience can easily relate and empathise with. His use of language and setting enables the audience to see this restricted, determined and intelligent lady that has had to come to terms with today's society. Although the audience can empathise with Doris, because she is an able minded person within a failing body, at the same time Bennett highlights Doris' stubborn side to her nature. This is indicated, particularly when, in her last moments of life she turns her back on help. Jenny Willis Page 2 ...read more.