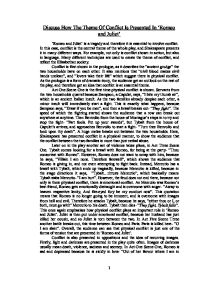 Discuss How The Theme Of Conflict Is Presented In 'Romeo and Juliet'.

Discuss How The Theme Of Conflict Is Presented In 'Romeo and Juliet' 'Romeo and Juliet' is a tragedy and therefore it is essential to involve conflict. In this case, conflict is the central theme of the whole play, and Shakespeare presents it in many different ways. For example, not only is conflict shown in action, but also in language. Many different techniques are used to create the theme of conflict, and reflect the Elizabethan society. Conflict is first shown in the prologue, as it describes the "ancient grudge" the two households have on each other. It also mentions that "civil blood makes civil hands unclean", and "lovers take their life" which suggest there is physical conflict. As the prologue is a form of dramatic irony, the audience get an outlook on the rest of the play, and therefore get an idea that conflict is an essential theme. Act One Scene One is the first time physical conflict is shown. Servants from the two households quarrel because Sampson, a Capulet, says, "I bite my thumb sir", which is an ancient Italian insult. As the two families already despise each other, a minor insult will immediately start a fight. This is exactly what happens, because Sampson says, "Draw if you be men", and then a brawl breaks out- "They fight". The speed of which the fighting started shows the audience that a row can break out anywhere at anytime. Then Benvolio from the house of Montague's steps in to try and stop the fight- "Part fools. ...read more.

This is what happens to Juliet in Act Three Scene Four, because Lord Capulet suddenly decides that Paris is to marry Juliet on the upcoming Thursday- "A Thursday let it be a' Thursday, tell her, she shall be married to this noble earl". Then, in the next scene, Act Three Scene Five, Lord Capulet threatens to throw her out if she does not marry Paris- "Graze where you will, you shall not house with me"- talks about her in a very disorderly manner- " you green-sickness carrion, out you baggage, You tallow face!" Lord Capulet also has control over his wife, showing that Lord Capulet has power over women, which was the type of environment that females lived in, in the sixteenth century. There is also an opposition of fate and destiny against free will. Fate and destiny is first mentioned in the prologue at the beginning of the play. It tells the audience that Romeo and Juliet were "star crossed" lovers, which may mean that they were meant to be with each other, or they were doomed by the fate of the stars It then goes on to say that the love between Romeo and Juliet was "death-marked", and therefore they were always going to die, no matter what they did to try and avoid it. This illustrates the power of the stars and the strong belief in astrology in the sixteenth century. However, the cause that started the "ancient grudge" could have been due to free will, and not fate and destiny. ...read more.

This makes the discord, more noticeable, and effective. The dialect used also has a great affect on conflict. For example, in Act Three Scene Five Lord Capulet uses very abusive language as he calls Juliet a "green-sickness carrion" and a "disobedient wretch". He also says that if she does not obey him he will leave her to "hang, beg, starve, die in the streets". The audience can tell from this type of language that there have been some conflicting events that have made Lord Capulet so angry. Shakespeare has used language well, in order to create an atmosphere of conflict, so that you would know what is going on, even by just hearing the words of the play. The audience can also see that the language can affect the speed of the play, and enhance the theme of conflict. For example, the brawl at the beginning started so suddenly, that the audience got an idea of how quickly a fracas can start. This is shown throughout the play, because whenever there is any sign of skirmish, the speed of the play seems to increase. In conclusion, it is clearly shown that conflict is essential in a tragedy in order make an interesting and effective play. Shakespeare has clearly done this, not only by including physical conflict, but verbal t as well. Shakespeare has used the Elizabethan lifestyle to show the different types of tension that were around when the play was created. However, these dispute are still around in the twenty-first century, and this play represents the fact that society may have modernised, but the same problems and conflicts still occur today. 1 ...read more.