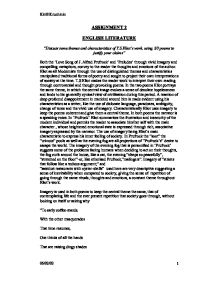 ASSIGNMENT 2 ENGLISH LITERATURE "Discuss some themes and characteristics of T.S.Eliot's work, using 2/3 poems to justify your claims" Both the 'Love Song of J .Alfred Prufrock' and 'Preludes' through vivid imagery and compelling metaphors, convey to the reader the thoughts and emotions of the author. Eliot as all Modernists through the use of distinguished themes and characteristics manipulated traditional forms of poetry and sought to project their own interpretations of society at the time. T.S Eliot makes the reader work to interpret their own reading through controversial and thought provoking poems. In the two poems Eliot portrays the same theme, in which the central image evokes a sense of desolate hopelessness and lends to his generally cynical view of civilization during this period. A reaction of deep profound disappointment in mankind around him is made evident using his characteristics as a writer, like the use of dislocate language, paradoxes, ambiguity, change of tense and the vivid use of imagery. Characteristically Eliot uses imagery to keep the poems coherent and give them a central theme. In both poems the narrator is a speaking voice. In 'Prufrock' Eliot summarises the frustration and insecurity of the modern individual and permits the reader to associate him/her self with the main character , whose heightened emotional state is expressed through rich, associative imagery expressed by the narrator. ...read more.

The characters described in these two poems are passionless and unemotional, although generally conforming correctly and properly to social standards, which adds emphasis to the theme Eliot portrays in both poems, people in the society going about their lives without realising much point to their existence. After the socially acceptable conventions of "the cups, the marmalade, the tea", "the porcelain" and "some talk of you and me" Prufrock is still unable to connect to the society emotionally, which demonstrates one of Eliot's themes of concern with the public and private self, and the contradictions between them. In 'Prufrock' he suggests that people are self masking, implying that mankind's public persona is false or empty "To prepare a face to meet the faces that you meet;" Eliot displays in 'Prufrock' the superficiality and emptiness of the masks people create, in the sense that these masks need to be prepared, constructed or made up. The division of self is a constant theme in both poems. The motive of the male observers in 'Prufrock' and the constant sense of unease at one's life in 'Preludes' castigates the inert self, which cannot act or assert their will. The person of feeling can treat no one except through his physical and psychological mask: through it he is interpreted and by it he is condemned. ...read more.

The characters are uncertain as to how to act or feel. Eliot invokes pathos in his poems to depict the pitiful situation of mankind in the modern world. For example, pathos is employed in 'Preludes' "I am moved by fancies that are curled Around these images, and cling: The notion of some infinitely gentle Infinitely suffering thing." Characteristically Eliot also uses death and decay throughout his poetry. A process of dying is one of the central theme's running through Eliot's to create a sense of inevitability. 'Prufrock' begins to "grow old", showing physical decay and he drowns him at the end, suggesting spiritual and mental decay, whereas in 'Preludes' Eliot uses "Assured of certain certainties" to create certainty and a sense of prostitution of people's lives as they were seen to be assured of one thing. Cynical rebukes are used when Eliot encourages us to laugh rather than pity the human condition: "Wipe away your hand across your mouth, and laugh". The subjects of Eliot's poetry suffer from defeated idealism, torturing their desires and view of reality. Typically of Eliot many of the subjects look back at an ancient glorified golden age, which is a topic for idealism, and contrast it with an image of the decaying modern world. ...read more.