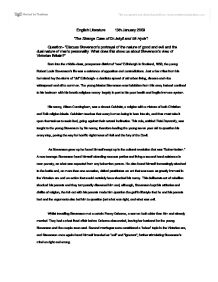 Discuss Stevensons portrayal of the nature of good and evil and the dual nature of mans personality. What does this show us about Stevensons view of Victorian Britain?

English Literature 13th January 2009 "The Strange Case of Dr.Jekyll and Mr.Hyde": Question- "Discuss Stevenson's portrayal of the nature of good and evil and the dual nature of man's personality. What does this show us about Stevenson's view of Victorian Britain?" Born into the middle-class, prosperous district of "new" Edinburgh in Scotland, 1850, the young Robert Louis Stevenson's life was a existence of opposites and contradictions. Just a few miles from his homeland lay the slums of "old" Edinburgh- a destitute sprawl of old urban living, disease and vice widespread and all to common. The young Master Stevenson was forbidden from this area, instead confined to his bedroom with his fanatic religious nanny- largely in part to his poor health and fragile immune system. His nanny, Alison Cunningham, was a devout Calvinist, a religion with a mixture of both Christian and Folk religion ideals. Calvinism teaches that every human being is born into sin, and thus must take it upon themselves to seek God, going against their natural inclination. This rule, entitled Total Depravity, was taught to the young Stevenson by his nanny, therefore leading the young seven year old to question his every step, paving the way for horrific nightmares of Hell and the fury of the Devil. As Stevenson grew up he found himself swept up in the cultural revolution that was "Bohemianism." A now teenage Stevenson found himself attending raucous parties and living a second hand existence in near poverty, as what was expected from any bohemian person. He also found himself increasingly attached to the bottle and, on more then one occasion, visited prostitutes- an act that was seen as greatly immoral in the Victorian era and an action that would certainly have shocked his nanny. This deliberate act of rebellion shocked his parents and they temporarily disowned him and, although, Stevenson kept his attitudes and dislike of religion, the fall-out with his parents made him question the gulf in lifestyle that he and his parents had and the arguments also led him to question just what was right, and what was evil. ...read more.

He yearns to be doing something else, somewhere else but feels compelled to follow his upstanding "Sunday custom". This is typical of Victorian society and a crucial element of understanding the "duality of man". For the Victorians tried to quench man's natural instinct and mould him into a figure they determined respectable. Yet in pushing, in repressing people so far man rebelled, and began to question the life he lived under, leading to all of the Victorian "vices", sex, alcohol and homosexuality becoming acceptable. Indeed, if it wasn't for the Victorians oppression of the minority and the poor we probably wouldn't be living in such a free society. The usage of pathetic fallacy is a common and important tool in Stevenson's novella. The fog increases in depth and prominence whenever Hyde is near , and the fog clears towards the end of the story when the mystery is close to being unravelled. "the first fog of the season, a great chocolate coloured pall lowered over the heavens" is a quote from the chapter: "The Carew Murder Case" and the use of pathetic fallacy has connotations of impending danger as well as connotations of the industrial revolution. The "chocolate coloured" essence of the fog has implications of the industrial revolution "poisoning" the fog, changing it's colour and also the times when the fog appears. The fog is stated as being the "first of the season", yet the timeline would mean the fog was unnaturally early, implying the industrial revolution is harming and manipulating Mother Nature. The fog could be interpreted as nothing more then smog, a poisonous relation of the cleaner and more natural fog. The relationship between the unnatural smog, produced by the industrial revolution and the natural fog could also be linked to the relationship between Jekyll and Hyde; Hyde is a less natural side effect of Jekyll's curiosity, Hyde is the poisonous, dangerous aspect of Jekyll. ...read more.

Hyde is forever associated with Hell and the Devil, whilst Jekyll and Utterson is associated with Gabriel, and the "light" side of religion. Religion is used to measure and signify, to compare and contrast. Religion also represents a divide in beliefs and personality. The end of the Victorian era was the first time, since the beginning of Christianity, that people were beginning to question and doubt religion. "Jekyll and Hyde" was penned during this time and concerns itself with the duality of man. Stevenson simply used the biggest cultural divide of the day: religion, and weaved it into his book, making the theme of duality more relevant to the reading Victorian audience. Overall, "The Strange Case of Dr Jekyll and Mr Hyde" questions and challenges what would have been conventional beliefs in the Victorian era. It makes the reader question his own sense of right and wrong, and challenges religion and science- the two cultures that were so opposed to each other in the Victorian ere. It incorporates the depression that surrounded the Victorian dynasty, the industrial revolution, the Jack the Ripper murders and the strict conformity of living the Victorians imposed. But it also includes the first green shoots of hope that began to surface around the late 1800's- Charles Darwin's "The Theory of Evolution" is integrated through Jekyll's science and the fact that Jekyll, despite through the persona of Hyde, engaged in activities such as sex and alcoholism sent the message that man can experiment, as long as it didn't threaten or harm anyone else. The book was aware of the duality and diversity of it's audience and revelled in this. Stevenson's book was a revolution in itself. For it changed the conventional type of living and made people question the rules they lived under. And any book that can influence people on this scale is a rare, and beautiful, thing. "The mark of a good action is that it appears inevitable in retrospect." Robert Louis Stevenson ...read more.