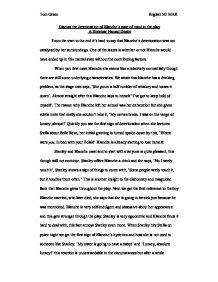 Discuss the deterioration of Blanche's state of mind in the play A Streetcar Named Desire.

Discuss the deterioration of Blanche's state of mind in the play A Streetcar Named Desire From the start to the end it's hard to say that Blanche's deterioration was not catalysed by her surroundings. One of the issues is whether or not Blanche would have ended up in this mental state without the contributing factors. When you first meet Blanche she seems like a relatively normal lady though there are still some underlying characteristics. We attain that blanche has a drinking problem, as the stage note says, 'She pours a half tumbler of whiskey and tosses it down'. Almost straight after this Blanche says to herself 'I've got to keep hold of myself'. The reason why Blanche left her school was her exhaustion but she gives subtle hints that really she couldn't take it, 'My nerves broke. I was on the verge of lunacy, almost!' Quickly you see the first sign of deterioration when she lectures Stella about Belle Reve, her initial greeting is turned upside down by this, 'Where were you. ...read more.

Blanche isn't able to understand her sister's feelings towards Stanley, 'and you - you let him? Didn't run, didn't scream?' Stella replies, 'I was - sort of - thrilled by it.' This difference between Blanche and her sister does not help Blanche, she cannot relate to Stanley's animal behaviour to Stella because Stella does not see him the same way. Scene five has a speech by Blanch about her time in Laurel and she says, 'you've got to be soft and attractive. And I - I fading now!' Blanche sums up her deterioration, she's fading away and there does not seem to be any stopping it. 'Why did you scream like that?' Blanche says, 'I don't know why I screamed!' Blanche had dropped her glass and she gave a piercing scream, seemingly very unnecessary. Blanche is getting more and more hysterical and unstable towards trivial problems. Stanley does not like Blanche staying at their house and he makes it as difficult as possible for her, especially in trying to get to the bottom of the Belle Reve situation. ...read more.

Mitch tells Blanche that he does not want to marry her anymore and that she is not clean enough to be introduced to his mother. This is the level in which characters such as Mitch and Stanley view Blanche. Blanche tells more lies to Stanley about her millionaire man offering to take her on a cruise and Mitch coming back to offer her flowers of forgiveness. Stanley knows these are not true, 'There isn't no millionaire! And Mitch didn't come back with roses cause I know where he is'. Stanley rapes Blanche and this sums up the deterioration she has gone through. The last scene in the play is when Blanche is unaware that she's going to be taken away but even so she is still worried about her look, she says 'How do I look?' just before she is about to meet the matron and the doctor. In the final act we see that Blanche has finally reached rock bottom. The Doctor who seems to be the only one who can control her, takes Blanche away, this shows that Blanche has continued to deteriorate through the play due to her overall mentality and the factors controlling it. Tom Green English Mr MAR ...read more.

This essay explores the ways in which Williams shows Blanche's deterioration well, however this is no appreciation for the audience response. In my opinion, a task such as this lends itself to discussing the significance of Blanche's deterioration, and how Williams uses it for dramatic impact. I would be talking about the deterioration moving the play into the tragic genre, allowing catharsis to occur at the end of the play.

The analysis is sound, but there are plenty of places where improvements could be made. For example, the essay does well in picking on Blanche's apparent normal flaws and appearance at the beginning of the play. But, if I were doing this essay, I would focus on the stage presence a bit more, and discuss how Williams manipulates her stage directions and clothes to show a deterioration. By having a sustained awareness of the piece as a play, you will gain credit. The focus on Blanche's language techniques is good, as from experience language is a key area that GCSE markers will look for. This could be slightly more technical, suggesting that Blanche has deteriorated into monosyllabic language. Unfortunately, this essay doesn't address the effect the degradation has on the audience. For example, a simple sentence talking about sympathy, or lack of it, would make this a stronger essay. Then, as mentioned earlier, the essay could draw upon a conclusion which enforces the significance of Blanche's deterioration to the success of the play in being dramatic.

The essay has a good structure, with an introduction and conclusion. However, both of these could be stronger. With the first sentence of the essay, I feel it could be more assertive for example saying "It's clear that Blanche's downfall is catalysed by her surroundings, and Williams makes this evident throughout." The style is sometimes questionable, for example "When you first meet Blanche" should be "When the audience first meet Blanche on stage" rather than using the second person. You aren't addressing the reader! Simple changes of style like this will ensure the marks for a well-structured essay. Spelling, punctuation and grammar are fine.