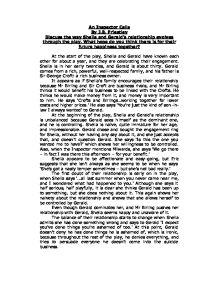 Discuss the way Sheila and Gerald's relationship evolves through the play. What hope do you think there is for their future happiness together?

An Inspector Calls By J.B. Priestley Discuss the way Sheila and Gerald's relationship evolves through the play. What hope do you think there is for their future happiness together? At the start of the play, Sheila and Gerald have known each other for about a year, and they are celebrating their engagement. Sheila is in her early twenties, and Gerald is about thirty. Gerald comes from a rich, powerful, well-respected family, and his father is Sir George Croft: a rich business owner. It appears as if Sheila's family encourages their relationship because Mr Birling and Sir Croft are business rivals, and Mr Birling thinks it would benefit his business to be linked with the Crofts. He thinks he would make money from it, and money is very important to him. He says 'Crofts and Birlings...working together for lower costs and higher prices.' He also says 'You're just the kind of son-in-law I always wanted' to Gerald. At the beginning of the play, Sheila and Gerald's relationship is unbalanced because Gerald sees himself as the dominant one, and he is controlling. Sheila is na�ve, quite immature for her age, and impressionable. Gerald chose and bought the engagement ring for Sheila, without her having any say about it, and she just accepts that, and doesn't question Gerald. She says 'Is this the one you wanted me to have?' which shows her willingness to be controlled. ...read more.

In the beginning of the play, you wouldn't expect her to know about something like that. Mrs Birling is shocked also, because Sheila has had a secluded, protected life and she doesn't think Sheila would know about Alderman Meggarty. She is not na�ve anymore. Gerald tries to make Sheila go out of the room to stop her hearing about his affair with Daisy Renton. He says 'I think Miss Birling ought to be excused from this questioning. She's nothing more to tell you.' But Sheila needs to know about the affair, and says 'It can't be any worse for me than it has been. And it might be better.' She is saying no to Gerald for the first time, and standing up to him. Their relationship is directly affected by the action of the drama. They find out things about each other and see sides of each other they had never known about before as a result of the Inspector's visit. Gerald says 'You've been put through it - and now you want to see somebody else put through it.' Sheila says 'So that's what you think I'm really like. I'm glad I realised it in time Gerald.' We see some of Sheila's nasty side in Act Two, Gerald says 'I didn't feel about her as she did about me', and Sheila replies with sharp sarcasm 'Of course not. You were the wonderful Fairy Prince. ...read more.

However, Sheila also says 'We'd have to start all over again - getting to know each other' which could mean she wants to start over again with Gerald. I think she could be encouraged and persuaded by her parents to stay with Gerald because Mr Birling says she had better ask for the ring back. Mr Birling is very eager for them to stay together because it will benefit his business and he will make money out of it, and money is the most important thing to him; I think even more important than his daughter's happiness. I don' t think they will ever be the same after finding out so much about each other. Sheila has realised what Gerald is like. Even in the opening of the play, there was no honesty or romance in their relationship, and Gerald lied to Sheila about the affair and about where he was in the summer. Their relationship wasn't very strong, and I don't think it can last after all that has happened. They may be questioned more, and find out more things they didn't know about each other when the second inspector comes. I think they will not get back together, even if the Birlings do try to persuade Sheila, because she has changed so much during the play, and can stand up to her family. Sheila emphasises that they shouldn't go on behaving like nothing happened, and they should learn from the experience, and I think she might leave Gerald because of what she has learnt about him and the things he has done. ...read more.

An extremely well-structured and sophisticated essay. The response contains an excellent structure and is extremely well-planned, exhibiting much thought. The points made are supported by evidence from the play and by apt quotations that are embedded rather than just ""tacked on"".

It could be improved by more reference to audience response to both characters and to placing their lives in a historical context. A little more discussion of Gerald would balance the analysis with an exploration of the double-standards and hypocrisy at the time the play is set. For example, in terms of the way Gerald's affair is viewed by the men and by Gerald himself in a dismissive and trivial way yet Eva Smith is looked down upon as wanton and immoral for having affairs.