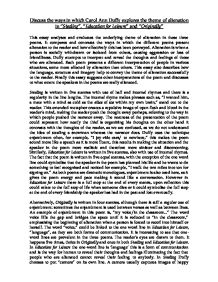 Discuss the ways in which Carol Ann Duffy explores the theme of alienation in Stealing, Education for Leisure and Originally

Discuss the ways in which Carol Ann Duffy explores the theme of alienation in "Stealing", "Education for Leisure" and "Originally" This essay analyses and evaluates the underlying theme of alienation in these three poems. It compares and contrasts the ways in which the different poems present alienation to the reader and how effectively this has been portrayed. Alienation is when a person is socially withdrawn or isolated from others, causing aggression or loss of friendliness. Duffy attempts to interpret and reveal the thoughts and feelings of those who are alienated. Each poem presents a different interpretation of people in various situations, some more affected by alienation than others. This essay also describes how the language, structure and imagery help to convey the theme of alienation successfully to the reader. Finally this essay suggests other interpretations of the poem and discusses to what extent the speakers in the poems are really alienated. Stealing is written in five stanzas with use of half and internal rhymes and there is a regularity in the line lengths. The internal rhyme makes phrases such as, "I wanted him, a mate with a mind as cold as the slice of ice within my own brain," stand out to the reader. This extended metaphor creates a repulsive image of open flesh and blood in the reader's mind, making the reader push the thought away perhaps, referring to the way in which people pushed the narrator away. ...read more.

they realise the snowman has gone, one would not expect a woman to think like this as woman are associated with loving and caring for their children). Another interpretation of the aggressive language could be that the speaker is a slightly aggressive person naturally and this could be the reason people have isolated him because they feel threatened by him. Furthermore, the way in which the poem seems to be answering a question, "The most unusual thing I have ever stolen?" implying the entire poem is a response to a question we have asked and likewise the poem ends as if the character is directly addressing the reader, for example, "You don't understand a word I'm saying, do you?" makes the reader jump and realise that he does not know what the speaker is talking about, as the reader cannot comprehend the idea of stealing a snowman. This explains why the speaker in the poem has been alienated, as people cannot understand him and his ways. In the same way, Education for Leisure repeats "I" several times throughout the poem to show the character's self-obsession revealing how alienated the speakers are as they focus the conversation with the reader on themself. Colloquialisms, such as "bog," make the speaker even more realistic and prosaic, this is eye-catching as Dufy really tries to make the poem as realistic as possible consequently the reader really understands the situation and almost sympathises with the narrator which is unnerving. ...read more.

In Originally there is a slight hint of Duffy's childhood, as she had to once move to a different place away from her home country Ireland. This poem could be an expression of her feelings and thoughts at that time. She uses a lot of imagery that refers back to a mother. For example, "our mother singing," and "We came from our own country in a red room," the red room could be referring to a mother's womb from which all humans originate. The main reason I chose these three poems is that the speakers are all very similar to each other. It is almost as if they are the same person growing up and getting more and more affected by being isolated by other people. All the three speakers in these poems have been alienated in some way, mainly because they do not seem 'normal' compared to the other people in their surroundings, so they have a sense of being outsiders. However, if the speakers are really alienated, it is a powerful and shocking technique that Duffy uses by ending her poems with a direct suggestion to the reader, for example, "I touch your arm," and "You don't understand a word I'm saying, do you." The fact that they are talking to us could be said to make us complicit in their possible crimes and this is what makes these poems extremely disturbing and thought-provoking. ...read more.