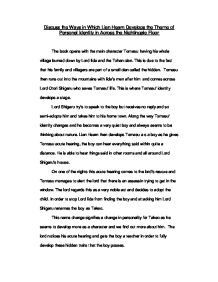 Discuss the Ways in Which Lian Hearn Develops the Theme of Personal Identity in Across the Nightingale Floor The book opens with the main character Tomasu having his whole village burned down by Lord Iida and the Tohan clan. This is due to the fact that his family and villagers are part of a small clan called the hidden. Tomasu then runs out into the mountains with Iida's men after him and comes across Lord Otori Shigeru who saves Tomasu' life. This is where Tomasu' identity develops a stage. Lord Shigeru try's to speak to the boy but receives no reply and so semi-adopts him and takes him to his home town. Along the way Tomasu' identity changes and he becomes a very quiet boy and always seems to be thinking about nature. Lian Hearn then develops Tomasu as a boy as he gives Tomasu acute hearing, the boy can hear everything said within quite a distance. He is able to hear things said in other rooms and all around Lord Shigeru's house. ...read more.

The story then changes completely and focuses on another person, Kaede. She is being held hostage by the evil Lord Noguchi who is one of the major enemies of Lord Otori. She then kills a man who tries to rape her and gets a bad name for herself. She becomes the lady of death with many people fearing that if they marry her they two will suffer the same fate, death. We find out that she is a very placid quiet girl almost like Takeo, as she kills the man who tries to kill her she develops into a person who is more confident and seems to bond better with some of the other characters. Kaede is set to marry an old man who unbeknown to the reader is Lord Shigeru. She begins on a long journey to meet this Lord Shigeru who she is set to marry. Lord Shigeru also sets of as they are set to meet halfway. Meanwhile Takeo is developing his talents and becomes more confident and is finally speaking to people. ...read more.

He becomes more of a warrior and is more unforgiving in his ways. Kaede meanwhile is training to also become a warrior as she wants to impress her new husband. Takeo sees Kaede around the village and they instantly fall in love but neither shows it as both know that Kaede is set to marry Lord Shigeru. The book ends with Lord Shigeru getting seriously injured by Lord Iida and Takeo has to kill him in order to stop him from suffering. Takeo then gets Lord Shigeru's magical sword which also seems to have a great effect on Takeo's personal identity he seems to become more or a warrior not a boy any more he has now killed some one with a sword. Kaede then meets Takeo and they both confirm each others thoughts that they were both madly in love with each other. They share one evening together before then being split apart again as Takeo had an obligation to join his tribe again. Once again his identity seems to be smashed into pieces and he becomes Tomasu again the quite little boy as he joins another tribe. ?? ?? ?? ?? ...read more.