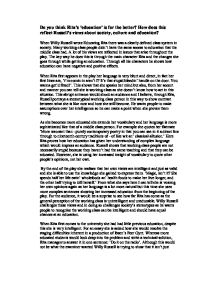 Do you think Ritas education is for the better? How does this reflect Russells views about society, culture and education?

Do you think Rita's 'education' is for the better? How does this reflect Russell's views about society, culture and education? When Willy Russell wrote Educating Rita there was a clearly defined class system in society. Many working class people didn't have the same access to education that the middle class had. A lot of his views are reflected in issues that arise throughout the play. The key way he does this is through the main character Rita and the changes she goes through while getting an education. Through all his characters he shows how education can have negative and positive effects. When Rita first appears in the play her language is very blunt and direct, in fact her first lines are, 'i'm comin in aren't I? It's that stupid bleedin' handle on the door. You wanna get'd fixed!'. This shows that she speaks her mind but also, from her accent and manner you can tell she is working class as she doesn't know how to act in this situation. This abrupt entrance would shock an audience and I believe, through Rita, Russell portrays a stereotypical working class person in this way to show contrast between what she is like now and how she will become. ...read more.

In fact Rita can see things in a whole different way that's as intelligent as an educated person's perspective which would surprise audiences and change their outlook. By the end she discovers the middle class weren't the perfect people she thought they were and so she doesn't feel second rate which causes her to acknowledge her own intelligence and opinions. This allows her to express her own opinions and challenge other's views. For example she tells a group of university students 'tryin' to compare 'Chatterley' with 'Sons and Lovers' is like tryin' to compare sparkling wine with champagne' Willy Russell shows that people's preconceptions of the working class can prove to be unfounded and that they should have the chance to prove this. At the beginning of the play Rita has a great admiration for educated middle class people as they embody all that she so badly wants, particularly their freedom to choose in life. Her attitude to working class people is very different. Although she feels she has a responsibility to defend them, she has some resentment as she sees they have held her back in life. Rita's character shows how the working class culture affected her attitude to learning and her lack of confidence in her own ability which resulted in her poor education. ...read more.

I think the play reflects Russell's view that education is something that should be available to everyone rich or poor. Despite having a bubbly personality Rita has to overcome her belief that she isn't clever enough to get an education which was very much the feeling of the entire working class at the time. However the dialogue at the beginning of the play and the fact she passes her exams shows her fears are unfounded. Willy Russell uses his play to show audiences their true capabilities because I think he wants to make the point that if middle class people don't believe in them how are they supposed to have any confidence in themselves. The main reason Rita, and in reality most of the working class, wanted to be middle class was the romantic notion that it was a life of freedom, free of constraints. However she soon realises this allusion to be false as she finds fitting in with their way of life very restricting. For example she finds it difficult to produce an exam deemed acceptable and worth a good grade. In fact Rita's tutor Frank strays increasingly onto the path of self-destruction throughout the play and her flatmate turns suicidal. I think through all of this Willy Russell is trying to show that actually as a culture the middle class are also trapped as they are bound by the system and have to conform to it's rules. ...read more.