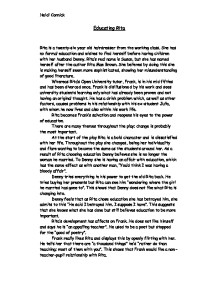 Educating Rita Rita is a twenty-six year old hairdresser from the working class. She has no formal education and wishes to find herself before having children with her husband Denny. Rita's real name is Susan, but she has named herself after the author Rita Mae Brown. She believes by doing this she is making herself seem more sophisticated, showing her misunderstanding of good literature. Whereas Rita's Open University tutor, Frank, is in his mid fifties and has been divorced once. Frank is disillusioned by his work and sees university students learning only what has already been proven and not having an original thought. He has a drink problem which, as well as other factors, causes problems in his relationship with his ex-student Julia, with whom he now lives and also within his work life. Rita becomes Frank's salvation and reopens his eyes to the power of education. There are many themes throughout the play; change is probably the most important. ...read more.

He does not like himself and says he is "an appalling teacher". He used to be a poet but stopped for the "good of poetry". Frank really likes Rita and displays this by openly flirting with her. He tells her that there are "a thousand things" he'd "rather do than teaching; most of them with you". This shows that Frank would like a non-teacher-pupil relationship with Rita. At the beginning Frank does not want Rita to have an opinion but towards the end he does not like or approve of what she has turned into. She has become like all the other students and lost what makes her different. She even gave up smoking because she believed it would make her fit in better with the middle class. Rita believes she is a "half-caste" because she does not fit in with the middle class but no longer fits in with the working class. ...read more.

Frank's flaw is alcoholism. It causes him to lose his job and relationship with Julia. He no longer has a clear view of when he should or should not drink. This is shown by the character of Frank getting drunk to do a lecture for his students and not seeing a problem in doing so. Willy Russell has developed the characters of Frank and Rita through change, due to education, each other's company and the pressure of class and culture. Rita has achieved her dream and more by passing the exam. She is educated and believes she now fits in with the middle class, she feels she has been improved, whereas Frank does not wish to be a part of society. He does not like the views and pressures placed on him by class and culture. Drinking is a way to relieve him from all of those pressures. Frank loses his job and relationship with Julia. The development of the characters of Frank and Rita show how class, culture and the people around you can affect the outcome of an individual's life. ?? ?? ?? ?? Heidi Cornick ...read more.