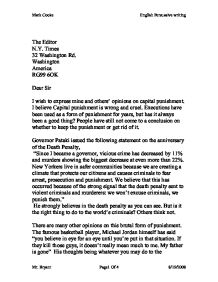 The Editor N.Y. Times 32 Washington Rd. Washington America RG99 6OK Dear Sir I wish to express mine and others' opinions on capital punishment. I believe Capital punishment is wrong and cruel. Executions have been used as a form of punishment for years, but has it always been a good thing? People have still not come to a conclusion on whether to keep the punishment or get rid of it. Governor Pataki issued the following statement on the anniversary of the Death Penalty, "Since I became a governor, vicious crime has decreased by 11% and murders showing the biggest decrease at even more than 22%. New Yorkers live in safer communities because we are creating a climate that protects our citizens and causes criminals to fear arrest, prosecution and punishment. We believe that this has occurred because of the strong signal that the death penalty sent to violent criminals and murderers: we won't excuse criminals, we punish them." He strongly believes in the death penalty as you can see. ...read more.

The death penalty has increased murder crimes. Data released by the British Home Office reveals that the United States, which retains the death penalty, has a murder rate that is three times higher than may European countries that have banned capital punishment. Surely this proves that the death penalty is not a deterrent to murder In conclusion I do not agree with capital punishment at all I do believe it is cruel and pointless it does nothing for the family of the murder victim it just shows that the world is just as cruel as the killers, murdering people instead of doing improving things. I hope this letter will persuade you to do something about this human massacre. Yours faithfully James Bolter The Editor New York Times 32 Washington Rd. Washington America RG99 6OK Dear Sir I would like to express mine and others' thoughts on capital punishment and to convince you that it is a great deterrent Is Capital Punishment an effective penalty? ...read more.

It has also been proved that the numbers of prisoners under sentence of death decreased for the fourth consecutive year in 2004. This proves that the death penalty is a strong deterrent. The threat of death puts the fear back into eyes of criminals, it stops most of the thieves, murderers and rapists from doing what they would do. Without it I think there would be much more crime in the States. An eye for an eye is what is said, and this should be practiced when a man kills another human being. 'Punishment is justice for the unjust,' Saint Augustine said. I believe in this statement very strongly as it means that the criminals will get what they deserve and it sends a message to the criminal fraternity that crime does not pay. I believe that capital punishment is good because it keeps the criminals where they should be, off our streets and in jail, making the world a more peaceful and safer place to live. Yours faithfully James Bolter ?? ?? ?? ?? Mark Cooke English Persuasive writing Mr. Bryant Page1 Of 4 8/19/2008 ...read more.