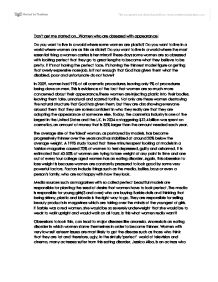 English Speech - Don't get me started on...Women who are obsessed with appearance.

Don't get me started on...Women who are obsessed with appearance! Do you want to live in a world where some women are plastic? Do you want to live in a world where women are as thin as sticks? Do you want to live in a world where the most essential thing a women carries is her mirror? These days some women are so obsessed with looking perfect that they go to great lengths to become what they believe to be pretty. If it's not having the perfect face, it's having the thinnest model figure or getting that overly expensive nose job. Is it not enough that God has given them what the disabled, poor and unfortunate do not have? In 2009, women had 91% of all cosmetic procedures, leaving only 9% of procedures being done on men. This is evidence of the fact that women are so much more concerned about their appearance.These women are injecting plastic into their bodies, leaving them fake, unnatural and scarred for life. ...read more.

Again, this obsession to lose weight is because women are constantly pressured to look good by some very powerful factors. Factors include things such as the media, bullies, boys or even a person's family, who are not happy with how they look. Media sources such as magazines with so called perfect beautiful models are responsible for planting the seed of desire that women have to look perfect. The media is responsible for young girls(3 and over) who are buying Barbie dolls and thinking that being skinny, plastic and blonde is the right way to go. They are responsible for selling beauty products in magazines which are taking over the minds of the youngest of girls. If Barbie was a real women, she would be so severely underweight that she would be to weak to walk upright and would walk on all fours. Is this what women really want? ...read more.

Why can't they see that they are not fat and being thin is not very important? In order to stop diseases such as anorexia from spreading further, we need to make a stand. In order to stop women from destroyed God's natural creations and see how beautiful they really are, we need to put an end to fashion magazines and the 'perfect' media. We need to get these women to see phyciatrists, to start eating and to stop looking in the mirror. We need to make more youth clubs were women can go to seek help if they are concerned with something. We need to show these women that there is more to life than appearance and that inner appearance is also beautiful. Perhaps religion can show these women the right way to go. To stop this world from becoming picture perfect and artificial, we need to help these women and show them that the money that they are spending on looking good can be put towards better causes. Together, we need to make a stand. ...read more.

This is a response to a question asking candidates to argue against women who are obsessed with their appearance. The answer focuses extremely well on clearly-established angle of response, using a variety of skills in order to address the question. ...

This is a response to a question asking candidates to argue against women who are obsessed with their appearance. The answer focuses extremely well on clearly-established angle of response, using a variety of skills in order to address the question. The focus is sustained very well and understanding of how to construct a convincing argument is evident throughout. It should not escape the candidate's understanding that, when writing to argue, fictitious statistics and exaggeration is greatly advised not only because it's simple enough to achieve, but also because, if used correctly, it can greatly strengthen their answer as it seems like they are talking from a position of authority, because they appear to know "the facts". This candidate here has done very well to include many statistics, however fictitious, and it creates the sense of someone who knows what they're talking about. The Response to the Question here is easily worthy of top marks.

The Level of Analysis and the use of language to answer the question is of a degree entirely expected of an excellent GCSE candidate. The candidate has used many techniques and devices that comprise of a convincing argument such as use of statistics ("In 2004 [...] $12.4 billion was spent on cosmetics, [...] 33% larger than the amount needed"), repetition (the opening Rule of Three "Do you want to...?" which also score points as rhetorical questions), second person address ("Together, we can make a stand"), and use of field-specific lexes (Anorexia).

Where some candidates might lose marks is that they are negligent of their opponent's viewpoint. Writing to argue always requires an appreciation of the counter-argument, so in this case, it would be from the viewpoint of someone who is obsessed with their outward beauty. This candidate has done well to include a short paragraph on actress Jessica Alba, and wins even more marks because it shows their ability to do external research and provide entirely factual counter-arguments (the use of The Sun newspaper is particularly clever, as it's exactly the kind of story that would appear there, showing sensitive awareness when dealing with real-life facts and figures) that are both valid and well-constructed so as not to dim the light on their own argument, after all, it's their argument about inner beauty they're trying to push forth.

The use of language here is exceptional, from the vocabulary used to the tone the writer employs in order to establish an informative and persuasive angle of writing. Also, plenty of quite humorous exaggeration is used with regards to the mention of Barbie, and the metaphors likening superficial women to plastic is particularly effective in winning over those reading.

The Quality of Written Communication here is sound. There are very infrequent moments here that suggest the candidate is unable to write effectively and accurately. There are however, minor instances where the candidate has clearly not re-read their answer and made simple spelling errors and comma splice "Jessica Alba, is an actress who has suffered from the dangerous grips, of anorexia": neither of the commas in this sentence are needed. A simple sentence re-structure would change this, but as stated earlier, these are minor instances and their is no such reason why the candidate should be penalised for such rarities. The majority of their answers is written with accuracy and a sensitive flair for the use of language, and how a variety of punctuation and grammatical techniques (sentence syntax, second person address) can help shape an excellent argument.