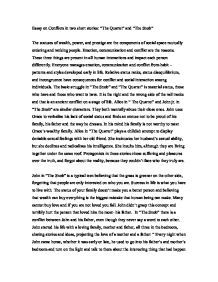 Essay on Conflicts in two short stories: "The Quartet" and "The Snob" The statuses of wealth, power, and prestige are the components of social space mutually ordering and ranking people. Emotion, communication and conflict are the reasons. These three things are present in all human interactions and impact each person differently. Everyone manages emotion, communication and conflict from habit - patterns and styles developed early in life. Relative status ranks, status disequilibrium, and incongruence have consequences for conflict and social interaction among individuals. The basic struggle in "The Snob" and "The Quartet" is material status, those who have and those who want to have. It is the right and the wrong side of the rail tracks and that is an ancient conflict on a stage of life. Alice in " The Quartet" and John jr. in "The Snob" are similar characters. They both mentally abuse their close ones. John uses Grace to verbalize his lack of social status and finds an excuse not to be proud of his family, his father and the way he dresses. In his mind his family is not worthy to meet Grace's wealthy family. ...read more.

She gets upset only when she fails to understand John's problems and pathetic accusations. Against all insinuations Grace gives up and says: "I think I better leave you right here." It's only that, John has the fear of loosing her and that is why he posses himself on his knees and begs her to stay. John is much more of a snob than Grace is. John continuously brings up the subject and fights with Grace about social status. John is the one who is ashamed of the way his father dresses and the ultimate insult is when he sees his father at the bookstore and ignores him completely. "Why does he dress as he never owned a descent suit in his life?" John is doing all the talking through the story, while Grace says only one word back at him. Although he betrays his father and chooses the path that he wants to be on, at the end, he still feels "wretched" and wondering about his father walking without his head turning. The most evident conflict in "Quartet" is between Alice and Behrens. Alice is a spoiled lady, living beyond her expectations. ...read more.

Alice agrees that Felicite is the only thing keeping her and Rombarra together. Behrens didn't have the ability to handle this conflict, so he just walks away "hidden from their view now by a row of tall palms." Felicite was making a circle of love and calmness fusing her parents together. Success is what you have to live with. John was born in educated, carrying family, which loved him very much and he should have accepted that, deal with the truth, be happy with what he has. He should have admired his father for what he has given him. As ten noble truths state: "Don't desire what other people have." He didn't want to agree with this statement ending up hurting his family and suffer, choosing pleasure and popularity. Alice wanted wealth, power and money and by luck she ended up being a wife of a count in Italy. She ended up being spoiled, reckless, different and careless about nobody, but her self. Although unhappy by her husband's deception, Alice is rather to stay with her husband then go back and live in the old country. John jr. and Alice portray the non-adjusted, wanting more and willing to hurt anyone that gets on their way. ...read more.