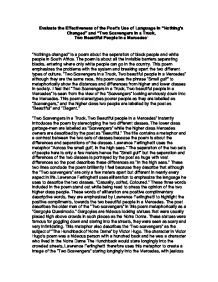 Evaluate the Effectiveness of the Poet's Use of Language in &quot;Nothing's Changed&quot; and &quot;Two Scavengers in a Truck,

The poem is set in South Africa by Tatamkhulu Afrika, a non colored poet but a man who had such strong views over the social system and separation of blacks from white people that he was imprisoned for campaigning against these barriers. Nothings changed compares the lives that colored people are forced to live and the luxuries and lives that the white people enjoy living. Tatamkhulu Afrika describes the invisible barriers and unwritten rules of where and where not black people are allowed to go. "District six. No board says is it. But my feet know." These three lines in the poem explain how, from the view of a small child who I feel is either a colored child or Tatamkhulu Afrika's view as a child, telling the reader that almost a sixth sense is warning the character that he shouldn't be there because of the separation. The poet here uses repetition to emphasize and "drill" into the reader the importance of the point the poet is trying to tell the reader. "and my hands, and the skin about my bones, and the soft laboring of my lungs, and the hot, white, inward turning." ...read more.

for a stone, a bomb," Tatamkhulu Afrika ends his poem expressing his anger at this icon of unjustice that is the new restaurant. He stares at the location and anger boils up inside of him, the hate he feels towards the system. He wants to smash the glass with a rock or the destroy the location with a bomb. To conclude the poem "Two scavengers in a truck, Two beautiful people in a Mercedes", Ferlinghetti describes two classes of people as they stop at a red light. Two garbagemen "on their way home" after finishing their days work, the second set is two high class elegant people "On the way to his architects office." The garbage men's day ends when the young couples begins. The poet compares the two lives and then seems to ask, at the end of the poem - whether America really is a democracy? Tatamkhulu Afrika's poem describes the troubled past of Africa's treatment of colored people, a subject we know the poet fought against. He describes the separation in the past, before 'showing' us the present. He describes how he feels nothing really had changed and his anger makes him want to destroy all the injustice done against colored people. ...read more.