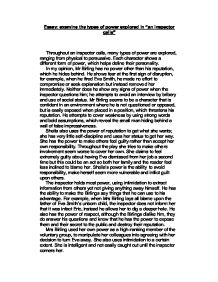 Examine the types of power explored in &quot;an inspector calls&quot;.

Essay: examine the types of power explored in "an inspector calls" Throughout an inspector calls, many types of power are explored, ranging from physical to persuasive. Each character shows a different form of power, which helps define their personality. In my opinion, Mr Birling has no power other than his reputation, which he hides behind. He shows fear at the first sign of disruption, for example, when he fired Eva Smith, he made no effort to compromise or seek explanation but instead removed her immediately. Neither does he show any signs of power when the inspector questions him; he attempts to avoid an interview by bribery and use of social status. ...read more.

Sheila's power is the ability to avoid responsibility, make herself seem more vulnerable and inflict guilt upon others. The inspector holds most power, using intimidation to extract information from others yet not giving anything away himself. He has the ability to make the Birlings say things that he can use to his advantage. For example, when Mrs Birling lays all blame upon the father of Eva Smith's unborn child, the inspector does not inform her that it was infact Eric, instead he allows her to dig a deeper hole. He also has the power of respect, although the Birlings dislike him, they do answer his questions and know that he has the power to expose them and their secret to the public and destroy their reputation. ...read more.

He appears to give her money to support her but it seems he may also be doing it so he feels he has power over her and she is in his debt. Eva Smith herself had a large amount of power in the form of influence. She has changed the relationships within the Birling family and has had an impact on each member individually. She managed to expose a completely different side to the well thought of family with seemingly innocent children. This play showed many forms of power, hidden within each family member and the other characters. The play demonstrates what we all know about human beings, that first impressions are not always accurate and some people are more powerful than we first think. ...read more.