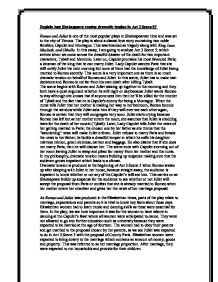 Explain how Shakespeare creates dramatic tension in Act 3 Scene 5? Romeo and Juliet is one of the most popular plays in Shakespearean time and was set in the city of Verona. The play is about a classic love story containing two noble families; Capulet and Montague. This was branded as tragedy along with King Lear, Macbeth, and Othello. In this essay, I am going to analyse Act 3 Scene 5; which arrives when we come across the dreadful disaster of the death for two important characters; Tybalt and Mercutio. Later on, Capulet promises his most favoured Paris; a kinsman of the king that he can marry Juliet. Lady Capulet assures Paris that she will notify Juliet the next morning but none of them had the knowledge of Juliet being married to Romeo secretly. This scene is a very important one as there is so much dramatic tension on behalf of Romeo and Juliet. In this scene, Juliet has to make vast decisions and Romeo is not far from his own death after killing Tybalt. The scene begins with Romeo and Juliet waking up together in the morning and they both have a quiet argument whether its still night or day because Juliet wants Romeo to stay although she knows that if anyone sees him then he'll be killed for the murder of Tybalt and the fact that he is Capulet's enemy for being a Montague. When the nurse tells Juliet that her mother is making her way to her bedroom, Romeo bounds through the window while Juliet asks him if they will ever see each other again, Romeo is certain that they will congregate very soon. Juliet starts crying because Romeo has left but as her mother enters the room, she assumes that Juliet is shedding tears for the death of her cousin (Tybalt). Later, Lady Capulet tells Juliet the news of her getting married to Paris; the chosen one by her father as she thinks that the "astonishing" news will make Juliet enliven. ...read more.

Juliet replies to Capulet sarcastically when she says "Not proud, you have; but thankful, that you have: Proud can I never be of what I hate; But thankful even for hate, that is meant love." Or her father thinks that she is being sarcastic because he doesn't understand that she's actually trying to say "I cannot be proud of you because I don't like what you've done for me but I'm still thankful for what you have done as I know you were thinking about my happiness because you love me so much." Juliet does not say anything when her father affronts her; she just continues to weep but tries once to beg her father to listen to her while she tries to explain. She cries "Good father, I beseech you on my knees, Hear me with patience but to speak a word." But unfortunately, Capulet gets even more enraged and starts to describe his daughter with severe words. I assume that Juliet was quiet while her father was shouting at her since she thinks that all this is her fault, if she hadn't fell in love with Romeo then it would be very likely for her to accept the proposal from Paris and everything would have been normal, she would have been the typical girl in those days. Juliet takes into consideration the fact that her parents don't know she is secretly married to Romeo, so she doesn't blame them for thinking that she's a disobedient child and should listen to her parents because they don't know why she can't get married to County Paris. Moreover, this builds tension for the audience because they think "Will Capulet raise his hand on Juliet?" or "Will he throw her out of the house and disown her?" or "Will he drag her on a hurdle thither towards the church to get married to Paris?" What will he do? ...read more.

Romeo and Juliet). Moreover, Act 3 shows plenty of valuable lessons for adolescence such as the difference of being mature and thinking that you're mature while you're still immature and childish. It advises you to take decisions in your life after you're completely mature and know what the consequences will be for your decisions, because you might make a big decision unwisely. It recommends not thinking that you're too powerful and that you don't need support because you might end up doing what Juliet done. In Romeo and Juliet times, in Verona, the world was male conquered and in a place like that, a woman has the power to do nothing but a limit of performing suicide. In addition, independence is taught from this play as it convinces women that they can be as self-governing as men, and you need to take the chance to be independent without worrying about the outcome, because women are not useless or what they use to think of women before in those days. Juliet demonstrated that she was self-sufficient by confronting her father, marrying Romeo secretly and being able to spend the night with him anonymously. In my own personal opinion, Shakespeare creates tension dramatically; he lets the audience guess what will happen next but makes the outcome completely the opposite. For instance when Juliet goes to the friar, we think that she and Romeo will live happily ever after or their families would concede and they will be blessed but Shakespeare makes the ending tragic with both of the star-crossed lovers dying. I also assumed that the play will have a happy ending but then was notified that if the conclusion was content then this play wouldn't have been as successful and popular as it has been. Romeo and Juliet is a play that is unforgettable after you see how much two adolescent people could be so in love, and the way their love story had to end with the cause being their families' feud. ...read more.