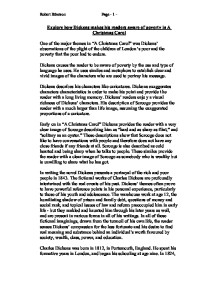 Explore how Dickens makes his readers aware of poverty in A Christmas Carol.

Explore how Dickens makes his readers aware of poverty in A Christmas Carol One of the major themes in "A Christmas Carol" was Dickens' observations of the plight of the children of London's poor and the poverty that the poor had to endure. Dickens causes the reader to be aware of poverty by the use and type of language he uses. He uses similes and metaphors to establish clear and vivid images of the characters who are used to portray his message. Dickens describes his characters like caricatures. Dickens exaggerates characters characteristics in order to make his point and provide the reader with a long living memory. Dickens' readers enjoy a visual richness of Dickens' characters. His description of Scrooge provides the reader with a much larger than life image, assuming the exaggerated proportions of a caricature. Early on in "A Christmas Carol" Dickens provides the reader with a very clear image of Scrooge describing him as "hard and as sharp as flint," and "solitary as an oyster." These descriptions show that Scrooge does not like to have conversations with people and therefore does not have any close friends if any friends at all. Scrooge is also described as cold hearted and being sharp when he talks to people. These similes provide the reader with a clear image of Scrooge as somebody who is wealthy but is unwilling to share what he has got. In writing the novel Dickens presents a portrayal of the rich and poor people in 1843. The fictional works of Charles Dickens are profoundly intertwined with the real events of his past. Dickens' themes often prove to have powerful reference points in his personal experience, particularly to those of his youth and adolescence. The warehouse work at age 12, the humiliating shadow of prison and family debt, questions of money and social rank, and topical issues of law and reform preoccupied him in early life - but they rankled and haunted him through his later years as well, and are present in various forms in all of his writings. ...read more.

Scrooge's reply shows his attitude to the poor "are there no prisons ?" "and the union workhouse ?" Scrooge's words described the common places that the poor were usually sent to. Dickens felt that the poor laws of 1834 were cruel, unfeeling and brought about misery. Factory owners saw the advantage and unashamedly exploited employees which was a direct result of the poor law. Scrooge believed that the poor deserved their fate and that the remedies for poverty provided by the work houses and prisons were sufficient. Dickens showed through Scrooge that the well off believed that they were doing enough. "The treadmill and poor law are in full vigour then?" Scrooge also showed that he believed he was doing his duty to help the poor when he said to the philanthropists "I help to support the establishments I have mentioned: they cost enough" Scrooge goes on to support his views previously mentioned by stating that "and those who are badly off must go there." The quotes clearly show that Scrooge is cold hearted, uncaring and selfish. His cold heartedness is even more clearly seen with his words "If they would rather die they had better do it, and decrease the surplus population" and with that Scrooge "resumed his labours with an improved opinion of himself." Dickens emphasis the powerfulness of his message in an effective way as "A Christmas Carol" is set at Christmas time which is the season of goodwill and everyone is meant to be joyous and generous. In the character of Bob Cratchit Dickens provides an opposite to Scrooge's values. Dickens tries to show in the novel that money, class and rank are unreliable guides to determining a human beings worth. Bob Cratchit's priorities are properly focused on family, love and companionship. Scrooge's attitude is in complete contrast with the Cratchit family "the Cratchit's danced around the table." This implies that the Cratchit's are happy and joyful even though they are poor. ...read more.

The reader sees how Scrooge has changed from being bitter and cruel to the poor, to now being generous and benevolent. The reader sees this by the language Dickens uses. He uses similes to describe the reformed scrooge. "Happy as an angel ...merry as a school-boy ...giddy as a drunken man." For Dickens poverty was the greatest evil and by the use of the character Ebenezer Scrooge in "A Christmas Carol" he is providing a clear image that nobody is beyond redemption. "A Christmas Carol" follows Scrooge's journey from a miserly misanthrope to an enthusiastic philanthropist. Scrooge's redemption takes him from somebody who believes the poor deserve what they get, to a belief that the remedies for poverty provided by law work-houses and prisons are not sufficient. The novel provides a clear and detailed view about Dickens' thoughts and beliefs on poverty, social class and the poor. Dickens believed that it was the duty of the wealthy to take responsibility for the prevention and cure of social ills such as poverty and the failure of society to look after the children of the poor. It is evident in many parts of "A Christmas Carol" that this is Dickens' message. Any person today would find it hard to be able to comprehend the appalling conditions and poverty of the poor in Dickens' time. However, through "A Christmas Carol" Dickens has been able to portray the conditions effectively at the time in a thought provoking manner. Class division is still evident in Britain today. There are still many homeless people, particularly in the larger cities such as London, who depend on the philanthropists of today helping them. There are also an ever increasing number of wealthy people due to there being many more commercial opportunities for people to make vast amounts of money such as from the stock markets, finance and the Internet. The divide between the rich and the poor is becoming greater and the warnings made by Dickens in "A Christmas Carol" still need to be heeded. Robert Ibbotson Page - 1 - ...read more.