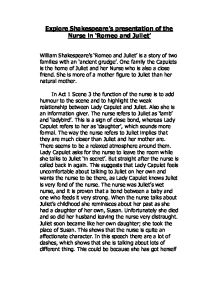 Explore Shakespeare's presentation of the Nurse in 'Romeo and Juliet'

Explore Shakespeare's presentation of the Nurse in 'Romeo and Juliet' William Shakespeare's 'Romeo and Juliet' is a story of two families with an 'ancient grudge'. One family the Capulets is the home of Juliet and her Nurse who is also a close friend. She is more of a mother figure to Juliet than her natural mother. In Act 1 Scene 3 the function of the nurse is to add humour to the scene and to highlight the weak relationship between Lady Capulet and Juliet. Also she is an information giver. The nurse refers to Juliet as 'lamb' and 'ladybird'. This is a sign of close bond, whereas Lady Capulet refers to her as 'daughter', which sounds more formal. The way the nurse refers to Juliet implies that they are much closer than Juliet and her mother are. There seems to be a relaxed atmosphere around them. Lady Capulet asks for the nurse to leave the room while she talks to Juliet 'in secret'. But straight after the nurse is called back in again. This suggests that Lady Capulet feels uncomfortable about talking to Juliet on her own and wants the nurse to be there, as Lady Capulet knows Juliet is very fond of the nurse. The nurse was Juliet's wet nurse, and it is proven that a bond between a baby and one who feeds it very strong. When the nurse talks about Juliet's childhood she reminisces about her past as she had a daughter of her own, Susan. Unfortunately she died and so did her husband leaving the nurse very distraught. Juliet soon became like her own daughter; she took the place of Susan. This shows that the nurse is quite an affectionate character. In this speech there are a lot of dashes, which shows that she is talking about lots of different thing. This could be because she has got herself so worked up about her husband and daughters death that she is confused and doesn't know what she is talking about. ...read more.

Whilst the nurse is complaining and delaying the news to Juliet she compliments Romeo, highlighting that 'his face be better than any man's' and that he is 'gentle as a lamb'. The audience would find the nurse very comical. Finally the nurse gives in and informs Juliet of the wedding arrangements. In this scene she teaches Juliet a lesson not to be selfish and to care for others. She cannot help but say something funny. The nurse says that 'he is not the flower of courtesy' but warrants him as she knows he is a good man. Earlier in the play she agreed that Juliet should marry Paris but now she is giving Romeo her blessing. The nurse seems to like Romeo a lot as she has helped him and Juliet a lot in the play. This shows that she is happy for him to be with Juliet. Juliet is overwhelmed by the news and the nurse notices the 'wanton blood' in her cheeks. At the end of this scene the nurse cannot resist being bawdy as she jokes to Juliet saying: 'fetch a ladder...your love must climb a bird's nest'. The nurse is happy for Romeo to be with Juliet and shows that she respects and trusts Romeo by helping them get married. The next scene in which the nurse appears is Act 3 Scene 2. Since we last seen the nurse Romeo and Juliet married. Romeo was banished from Verona for killing Tybalt as Tybalt killed Mercutio, Romeo's friend. The function of the nurse in this scene is to again be a messenger and also tells Juliet that she will bring Romeo to her. The scene starts off with Juliet alone in her room, still unaware of Tybalt's death. The nurse arrives with the rope ladder. The nurse is upset about Tybalt's death but Juliet assumes that Romeo is dead. The nurse is grieving and Juliet assumes that both Romeo and Tybalt are dead. ...read more.

The nurse mourns for Juliet with the Capulet family. The Friar attempts to offer them consolation saying that Juliet is in a better state now that she is in heaven. However the Friar knows otherwise; that Juliet is really is a deep sleep and will awaken after time. He talks to the Capulet's as if she is dead. The nurse shows a lot of emotion in this scene, her relationship with Juliet was still unclose due to their argument and didn't and will not have a chance to change this. Due to Juliet's 'death' the nurse and Juliet will never have the same closeness again. The audience would also know of Juliet's plan and by sympathetic towards mainly the nurse as they knew how much she cared about Juliet and how she only wanted her to be happy. Throughout the play, she appears, however when she loses Juliet's trust, she is lost from the play. The Nurse plays a critical role in Romeo and Juliet. Her relationship with major characters and her part in the secretive romance of the two lovers cause the play's actions to move quickly and in a powerful way. The Nurse acts as Shakespeare's p**n to guide the events of the play in a dramatic manner. The audience reaction to this scene would be shocked, as they would never think that Juliet and the nurse would ever be like this after such a long time of being so close. All of this portrays the Nurse's importance in the play. Without her, the play would be less entertaining as she adds humour to the play, but also makes the sad moment even more depressing as when Juliet dies, we feel sorry for the Nurse the most as she has brought her up from when she was born and she has to witness her tragic death, which she may feel partly responsible for, as she advised Juliet to forget about Romeo and wed Paris. The plot could not have been developed and the story could not have been facilitated if it was not for the essential character of the Nurse! ...read more.