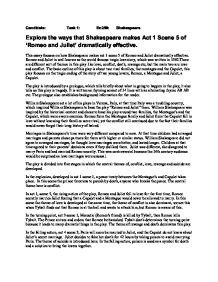 Candidate: Task 1: En2/lit: Shakespeare Explore the ways that Shakespeare makes Act 1 Scene 5 of 'Romeo and Juliet' dramatically effective. This essay focuses on how Shakespeare makes act 1 scene 5 of Romeo and Juliet dramatically effective. Romeo and Juliet is well known as the world famous tragic love story, which was written in 1562.There are different sort of themes in this play like love, conflict, death, revenge etc, but the main two are love and conflict. The basic outline of this play is about two rival families, the montages and the Capulet; this play focuses on the tragic ending of the story of two young lovers, Romeo, a Montague and Juliet, a Capulet. The play is introduced by a prologue, which tells briefly about what is going to happen in the play; it also tells us this play is tragedy. It is written as rhyming sonnet of 14 lines with an alternating rhyme AB AB etc. The prologue also establishes background information for the reader. William Shakespeare set a lot of his plays in Verona, Italy, at that time Italy was a troubling country, which inspired William Shakespeare to base the play "Romeo and Juliet" there. ...read more.

When Romeo sees Juliet who appears dead, he drinks the poison and dies. Juliet wakes up, finds Romeo dead, and kills herself with a dagger. Both families agree to stop the hatred after the tragedy. The conclusion relates back to act 1 scene 5 because in that scene Romeo and Juliet meet, if they had not met and fell in love then the death would not had happen. In Romeo and Juliet, act 1 scene 5 is significant for two major reasons, the first and most important reason is that Romeo and Juliet meet for the first time and fall in love instantly. The second reason is that it makes the audience think that the ball night is happy and joyous occasion, but in this night Tybalt tries to kill Romeo. Shakespeare uses imagery of dark and light as a motif, from the first scene to the last. The play is filled with contrasts of light and dark, for example "symbolic of the natural beauty of young love" which means both Romeo and Juliet see the other as light in a surrounding darkness. ...read more.

This quote shows that how he is trembling in anger and frustration after finding out about Romeo. Shakespeare uses the structure of the sonnet to draw the attention of audience to Romeo and Juliet's meeting. During this sonnet, their love is shown by holding hands and kissing; Juliet allows Romeo to kiss her hand. This is dramatically effective because in Elizabethan times this never happened; it was like a big sin. Towards the end of Act 1 Scene 5, Romeo and Juliet realise they have fallen in love. When Romeo finds out that he has fallen in love with a Capulet: "is she a Capulet? O dear account! My life is my foe's debt" Romeo says that he is in debt to his foe. When Juliet finds out about Romeo being Montague, he says: "my only love sprung from my only hate!" Juliet also realises she has fallen in love with her enemy. Shakespeare has made this scene dramatically effect in many ways by using finely tuned drama, this scene is the most important scene of the play because without this scene Romeo and Juliet would not have met and fallen in love and this play would have just then been about two rival families. ...read more.