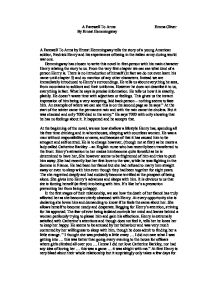 Farewell To Arms By Ernest Hemmingway.

A Farewell To Arms Emma Oliver By Ernest Hemmingway A Farewell To Arms by Ernest Hemmingway tells the story of a young American soldior, Fredrick Henry and his experiences of being in the italien army during world war one. Hemmingway has chosen to write this novel in first-person with his main character Henry relating the story to us. From the very first chapter we can see what kind of a person Henry is. There is no introduction of himself (in fact we do not even learn his name until chapter 5) and no mention of any other characters. Instead we are immediately introduced to Henry's surroundings. He tells us about everything he sees, from mountains to soldiors and their uniforms. However he does not describe it to us, everything is fact. What he says is precise information. He tells us how it is exactly, plainly. He doesn't waste time with adjectives or feelings. This gives us the instant impression of him being a very accepting, laid back person - nothing seems to faze him. An example of where we can see this is on the second page as he says " At the start of the winter came the permanent rain and with the rain came the cholera. ...read more.

It seemed to work but that was probably because we were thinking the same things anyway ... we said to each other that we were married the first day she had come to the hospital and we counted months from our wedding day. I wanted to be really married." Henry has become a changed man - he is no longer afraid at all of being in a relationship and is happy and willing to be with Catherine forever. She however is still very much the same, still terrified of losing Henry and insecure in herself of not being able to make him happy. " I haven't been happy for a long time ... but now we're happy and we love each other. Do lets just be happy. You are happy aren't you? Is there anything I do you don't like? Can I do anything to please you? Would you like me to take my hair down? Would you like to play?" We can see clearly Catherine's desperation to please Henry, but it is difficult to understand why she is still so frightened of losing him when he now has become so open, showing her exactly how he feels. ...read more.

He knows that noone can make a difference to the situation - you can't change the stars. " Poor, poor dear Cat. This was the price you payed for sleeping together. This was the end of the trap. This is what people got for loving each other ... So now they got her in the end. You never got away with anything. Get away h**l! It would have been the same if we had married fifty times ... Now Catherine would die. That's what you did. You died. You did not know what it was about. You never had time to learn. They threw you in and told you the rules and the first time you were caught off base, they killed you" He suddenly understands that we are nothings. Just little creatures thinking we are getting through life - but we're never really in control. There's something greater out there who's really in charge. And this message was the whole point of the book what Hemmingway wanted us all to learn. He sacraficed a happy ending and his main character's happiness to show us what life really is. He even excluded simple things like adjectives in the text, which left a story full of facts that caused the impact to be harder hitting for us. ...read more.