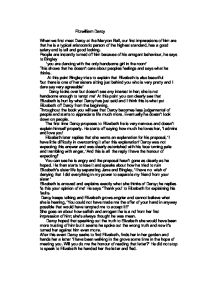 When we first meet Darcy at the Meryton Ball, our first impressions of him are that he is a typical aristocratic person of the highest standard, has a good salary and is tall and good looking.

People are instantly turned off him because of his arrogant behaviour, he says to Bingley

‘you are dancing with the only handsome girl in the room’

This shows that he doesn’t care about peoples feelings and says what he thinks.

Darcy looks over but doesn’t see any interest in her; she is not handsome enough to tempt me’ At this point you can clearly see that Elizabeth is hurt by what Darcy has just said and I think this is what put Elizabeth off Darcy from the beginning.

Throughout the book you will see that Darcy becomes less judgemental of people and starts to appreciate life much more. Eventually he doesn’t look down on people.

The first time Darcy proposes to Elizabeth he is very nervous and doesn’t explain himself properly. He starts off saying how much he loves her, ‘I admire and love you’

Elizabeth later replies that she wants an explanation for his proposal, ‘I have little difficulty in overcoming it after this explanation’ Darcy was not expecting this answer and was clearly astonished with his face turning pale and trembling with anger, ‘And this is all the reply I have the honour of expecting!’

You can see he is angry and the proposal hasn’t gone as clearly as he hoped. He then starts to lose it and speaks about how he tried to ruin Elizabeth’s sister life by separating Jane and Bingley, ‘I have no wish of denying that I did everything in my power to separate my friend from your sister ‘

Elizabeth is amazed and explains exactly what she thinks of Darcy; he replies ‘is this your opinion of me’ He says ‘Thank you’ to Elizabeth for explaining his faults.

Darcy keeps talking and Elizabeth grows angrier and cannot believe what she is hearing, ‘You could not have made me the offer of your hand in anyway possible that would have tempted me to accept it!!’

She goes on about how selfish and arrogant he is and from her first impression of him; she’s always thought he was mean.

Darcy hoped that speaking out the truth to Elizabeth she would have been more trusting of him but it seems he spoke out the wrong truth and now it’s turned her against him even more.

After this event Darcy seeks to find Elizabeth, finds her in her garden and hands her a letter ‘I have been walking in the grove some time in the hope of meeting you. Will you do me the honour of reading that letter?’ He did not stop to speak to Elizabeth he handed her the letter and fled.

The letter goes on to say that he is sorry about the remarks he came out with and about Bingley and Elizabeth’s sister ‘regardless of the sentiments of either, I had detached Mr. Bingley from your sister,’ Darcy doesn’t like to say sorry very often and always thinks that he is right but this time he knows that he has done wrong and clearly says that he is sorry ‘I can only say that I am sorry.’ He then refers back to the meryton ball and that he was attracted to Elizabeth’s sister ‘your sister I also watched. Her look and manners were open, cheerful, and engaging as ever’ he carries on to explain that he is truly sorry and that he loves her very much, toward the end of his letter he explains why he didn’t say all of this last night and because he wasn’t brave enough to tell her in person ‘"You may possibly wonder why all this was not told you last night; but I was not then master enough of myself to know what could or ought to be revealed. For the truth of everything here’ After reading the letter you can see how in love and how desperately he wants Elizabeth and he won’t cease until he gets her!

Elizabeth arrives at Pemberly and she can tell that she is not welcomed ‘convinced as Elizabeth now was that Miss Bingley's dislike of her had originated in jealousy’ Darcy’s sister was also there, Elizabeth didn’t know whether she wanted Darcy to arrive or not, she later received a letter from Jane explaining that her sister Lydia had ran off to Scotland with wickham ‘she was gone off to Scotland with one of his officers; to own the truth, with Wickham!’ she wanted to find her uncle to tell him the news when she opened the door and Darcy appeared, she is surprised by his visit but doesn’t seem interested "I beg your pardon, but I must leave you. I must find Mr. Gardiner this moment, on business that cannot be delayed; I have not an instant to loose." Darcy tries to redeem himself by offering her a glass of wine ‘A glass of wine; shall I get you one?’ He knew that Elizabeth was upset by the letter that he sent her so he does everything in his will to try and redeem her, Elizabeth explains to him that Lydia and Wickham have run off together, he acts surprised, because he doesn’t want anything to happen between the Bennett’s. She tells him everything, which had happened, and he scarcely says a word and he tries to absorb everything. He looks utterly concerned and he leaves. He doesn’t want anything to happen to the bennets name and he wants everything to be normal so that Elizabeth will not be stressed and he might have a chance with her.