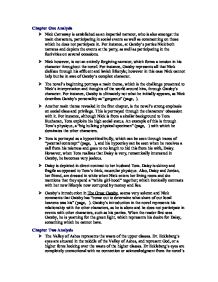 Gatsby's introduction in The Great Gatsby, seems very solemn and Nick comments that Gatsby has &quot;come out to determine what share of our local heavens was his&quot; (

Chapter One Analysis > Nick Carraway is established as an impartial narrator, who is also amongst the main characters, participating in social events as well as commenting on those which he does not participate in. For instance, at Gatsby's parties Nick both narrates and depicts the events at the party, as well as participating in the festivities on several occasions. > Nick however, is not an entirely forgiving narrator, which forms a tension in his character throughout the novel. For instance, Gatsby represents all that Nick dislikes through his affluent and lavish lifestyle; however in this case Nick cannot help but be in awe of Gatsby's complex character. > The novel's beginning portrays a main theme, which is the challenge presented to Nick's interpretation and thoughts of the world around him, through Gatsby's character. For instance, Gatsby is ultimately not what he initially appears, as Nick describes Gatsby's personality as "gorgeous" (page, ). > Another main theme revealed in the first chapter, is the novel's strong emphasis on social class and privilege. This is portrayed through the characters' obsession with it. For instance, although Nick is from a similar background to Tom Buchanan, Tom exploits his high social status. ...read more.

> Myrtle Wilson is introduced in chapter two and is a in stark comparison with Daisy Buchanan. Myrtle dresses in dark, vibrant colours, she is straightforward and her fleshiness is depicted as Fitzgerald presents her with large b*****s and hips. All these traits are in contrast to Daisy as she wears light colours such as white and has a somewhat flimsy physique. > At Tom's party the reckless behaviour of the wealthy is portrayed when Tom breaks Myrtle's nose. This reckless attitude is exactly what Nick, the narrator dislikes about the wealthy. > Characters are also defined by their clothing, as their clothing is reflective of their mood and personality. Fitzgerald's comment seems to be that the affluent are truly superficial as they are portrayed as practically being what they wear. For instance, when Myrtle changes into a cream-coloured dress, she becomes more similar to Daisy, more artificial with her laughter and speech being greatly affected. > Chapter two in general depicts society as morally decaying. For instance, Myrtle's excuse for having an affair with Tom is that "you can't live forever" (page, ). > Nick's narration remains partial throughout chapter two, as he still comments on but occasionally participates in social events. ...read more.

These illegal dealings are bootlegging, which was the illegal distribution of alcohol. > This enforces Fitzgerald's comment on corruption in society underlying a glorious fa�ade. > Anti-semitism in America was on a high during the 1920s, which provides a reason for Fitzgerald characterizing Wolfsheim's physical appearance with stereotypically Jewish features. For instance, Wolfsheim has a large nose and a diminutive stature. Jews were characterized with greed during the 1920s and Wolfsheim represents the greed and corruption in the "Jazz Age," as well as being a racially stereotypical Jew. > Chapter four also reveals the object that Gatsby desires, which is Daisy Buchannan, who the green light that Gatsby longingly looks at represents. The green light represents Gatsby's hope and desire for Daisy and the American Dream as a whole as the green light is something that is unattainable, as is the American dream according to Fitzgerald's portrayal. > Gatsby's parties are revealed to be of the sole purpose of attracting Daisy. Daisy is Gatsby's inspiration for living his lifestyle and she is why he reinvented himself as a fashionable millionaire, so that he could court her love. > Daisy, in chapter four, also seems to be a symbol of the American Dream, as her corruption and emptiness represents the corruption that has seized the practice of the ideology of the American Dream. ...read more.