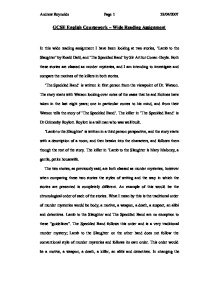 GCSE English Coursework - Wide Reading Assignment In this wide reading assignment I have been looking at two stories, 'Lamb to the Slaughter' by Roald Dahl, and 'The Speckled Band' by Sir Arthur Conan-Doyle. Both these stories are classed as murder mysteries, and I am intending to investigate and compare the motives of the killers in both stories. 'The Speckled Band' is written in first person from the viewpoint of Dr. Watson. The story starts with Watson looking over notes of the cases that he and Holmes have taken in the last eight years; one in particular comes to his mind, and from their Watson tells the story of 'The Speckled Band'. The killer in 'The Speckled Band' is Dr Grimesby Roylott. Roylott is a tall man who was well built. 'Lamb to the Slaughter' is written in a third person perspective, and the story starts with a description of a room, and then breaks into the characters, and follows them though the rest of the story. The killer in 'Lamb to the Slaughter is Mary Maloney, a gentle, petite housewife. The two stories, as previously said, are both classed as murder mysteries, however when comparing these two stories the styles of writing and the way in which the stories are presented is completely different. An example of this would be the chronological order of each of the stories. What I mean by this is the traditional order of murder mysteries would be body, a motive, a weapon, a death, a suspect, an alibi and detectives. ...read more.

At the beginning of the story no one would be expecting Mary to be the murderer. It's only when she actually raises the lamb to strike Patrick that you get any real evidence that she is the killer in the story. Mary is also very much in love with her victim, this can be proven by the following two quotes, "she loved to luxuriate in the presence of this man." And, "She loved the intent, far look in his eyes when they rested on her." Once again I will mention that this attack was not planned, and I think it would be fair to say that she was temporarily insane at the time of killing her husband. However the killer in 'The Speckled Band' is quite the opposite. I would say that the main difference is the fact that Dr Grimesby Roylott, the killer in 'The Speckled Band', planned out the way he would kill his intended victims. Another point I would like to make about Dr Roylott is he is described as looking, in my opinion, like a regular killer of the period would look like, well built, strong, dressed in black. "...our door had been suddenly dashed open, and that a huge man framed himself in the aperture. His costume was a peculiar mixture of the professional and of the agricultural, having a black top-hat, a long frock-coat, and a pair of high gaiters, with a hunting-crop swinging in his hand." ...read more.

"'Personally, I think its right here on the premises.' 'Probably right under our very noses. What do you think, Jack?" Jack, of course was the lead detective. I believe that with this one line Dahl succeeds in making fools of the whole police force. 'The Speckled Band' is very different. There are only 2 detectives, private detectives at that, hired specially for the occasion. Holmes and Watson were very professional, and took everything into consideration, and left no stone unturned in their quest to find the killer. The atmosphere in this story compared with that of 'Lamb to the Slaughter' is like chalk and cheese. The ambience in 'The Speckled Band' is tense, and on the wire, with an air of determination, and humour in places, "'You are Holmes the meddler.' 'My friend smiled.' 'Holmes the busybody.' 'Holmes the Scotland Yard jack-in-office'" I feel that with the reader not finding out the killer until the end of the story, the role of Holmes is basically just to give clues to the reader, and point them in the right direction of themselves finding out who the murderer is. I would say that the main difference between the two stories is, one is serious, and abides by "the rules" of traditional murder mysteries, and the other is just comical, making fun of the police force. This one difference pushes the stories poles apart from each other, and yet, they both make for an interesting read. By Andrew Reynolds Andrew Reynolds Page 1 28/04/2007 ...read more.