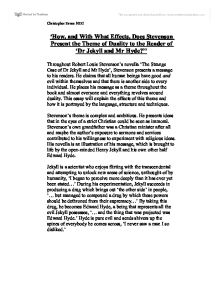 'How, and With What Effects, Does Stevenson Present the Theme of Duality to the Reader of 'Dr Jekyll and Mr Hyde?'' Throughout Robert Louis Stevenson's novella 'The Strange Case of Dr Jekyll and Mr Hyde', Stevenson presents a message to his readers. He claims that all human beings have good and evil within themselves and that there is another side to every individual. He places his message as a theme throughout the book and almost everyone and everything revolves around duality. This essay will explain the effects of this theme and how it is portrayed by the language, structure and techniques. Stevenson's theme is complex and ambitious. He presents ideas that in the eyes of a strict Christian could be seen as immoral. Stevenson's own grandfather was a Christian minister after all and maybe the author's exposure to sermons and services contributed to his willingness to experiment with religious ideas. His novella is an illustration of his message, which is brought to life by the open-minded Henry Jekyll and his own other half Edward Hyde. Jekyll is a scientist who enjoys flirting with the transcendental and attempting to unlock new areas of science, unthought-of by humanity, 'I began to perceive more deeply than it has ever yet been stated...' During his experimentation, Jekyll succeeds in producing a drug which brings out 'the other side' in people, '... but managed to compound a drug by which these powers should be dethroned from their supremacy...' ...read more.

If Hyde is pure evil and is crying, this may contradict Stevenson's message of two separate sides to everyone's nature, as the pure evil side of somebody is capable of mixing with the better side. Maybe we simply do not understand the full meaning of his message. Hyde after all has been created by Jekyll, and similarly to the monster in 'Frankenstein', may wish that he had not been. Certainly the hatred everybody has for him would make him feel that way. Hyde is no longer in control of his own life as he needs the sanctuary of Jekyll; the police are searching for him as the murderer of Carew, 'Jekyll was now my city of refuge.' Hyde believes that Jekyll could easily commit suicide and end his life anyhow. Therefore, Hyde could be killed if found by the police or if Jekyll commits suicide. Hyde is frightened of Jekyll and is no longer in control of his own destiny. This can win him the reader's sympathy. It is these questions that lead the reader to doubt their feelings towards the two characters. After all, it is unnatural to see the elements of one character as two separate characters and therefore the reader is unsure how to react at the end of the novella. This is particularly true of the reader's reaction to the unusual narrative voice. ...read more.

Certainly the title suggests a detective story, as does the chapter 'The Carew Murder Case' through the choice of title, but also the structure in which the chapter is written. The entire section sounds remarkably like a newspaper report with its eyewitness accounts and the narrative tone. However, Stevenson's message of duality throughout the book places it more in the gothic or horror areas. It is an unnatural concept that we as human beings find hard to comprehend. The fear comes from what we do not know about ourselves or other people. In conclusion, the novella enables Stevenson to showcase his ideas about duality and split personalities. He does this in a variety of different ways but most importantly through the characters of Henry Jekyll and Edward Hyde. The author makes his message sound convincing as he constantly provides the reader with the theme of duality in a lot of different ways, such as the dual nature of places and objects and the society itself. Everything in the book seems to revolve around duality, which convinces the reader the message is valuable by showing the thought and care put into the book. His message is designed to make people reflect on their own lives and their whole view on the world. Personally, I do not agree with Stevenson as I feel that good and evil are just concepts themselves. We label acts as good or evil and therefore that is just our perception of the world. Christopher Evans 10D2 ...read more.