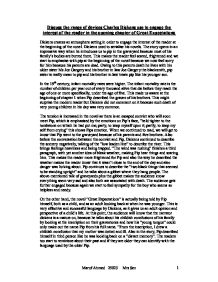 Discuss the range of devices Charles Dickens use to engage the interest of the reader in the opening chapter of Great Expectations Dickens creates an atmosphere setting in order to engage the interest of the reader at the beginning of the novel. Dickens used to serialise his novels. The story opens in an impressive way when he introduces us to pip in the graveyard because most of his family's bodies are burred there. This makes the reader feel scared, frightened and we start to emphasise with pip at the beginning of the novel because we now feel sorry for him because his parents are dead. Owing to this parents death he lives with his older sister Ms Joe Gargery and his brother in law Joe Gargery the blacksmith, pip sister is really mean to pip and his brother in law treats pip like his younger son. In the 19th century, infant mortality rates were higher. The infant mortality rate is the number of children per year out of every thousand alive that die before they reach the age of one or more specifically, under the age of five. This made us aware at the beginning of chapter 1 when Pip described the graves of his brothers. ...read more.

Dickens gives the audience a very detailed and precise description of what the man looks like, he looks scruffy to pip but dickens doesn't describe him as scruffy, he was having dishevelled broken shoes, he was with no hat, he was having a rag tied around his head, he was soaked in water, covered in mud and he was with a manacle on one leg. A manacle is an old English word for handcuff or a long big metal chain. The manacle on one of his legs will also let the audience know that he was a prisoner. Also the fact that he was with no hat shows the audience that he has no respect according to the 19th century manners. Dickens tells us of a man, all in "Coarse grey". The colour of his clothes and the state of his clothes tells us that he was from the lower class of the society and also his behaviour is unrefined. He might have been sweating like someone has poured water on him. His appearance in front of Pip was that he has no respect that means he was with no hat according to the Victorian Times. ...read more.

Pip feels guilty about everything, including being alive. He has a remarkable sense of guilt. "If ever anybody's hair stood on end with terror, must have done so then". Pip is in a state of terror at the thought of stealing from Mrs Joe and the violent man outside intent on eating him. In Dickens' time, all novels were published in serial form in magazines. Each group of chapter published would end in a cliffhanger. This would ensure the readership the next copy of the magazine would be like. Chapter 2 ends in a cliffhanger. The young boy, Pip turns back into the darkness to find the convict and therefore putting himself into a dangerous situation. The reader will be asked his or herself what will happen to Pip, which will increase the attention of the reader which will make them want to know more to find out what, has happened. I think the next chapter will be scary because Pip has run off into the darkness again to give 'Wittles' to the convict. 'Wittles' is also an old English word for food. Also, Pip will be in trouble because of the food he is going to give to the convict especially from his sister. It is going to be marvellous and fantastic. ?? ?? ?? ?? 1 Maruf Ahmed 25023 Mrs Sen ...read more.