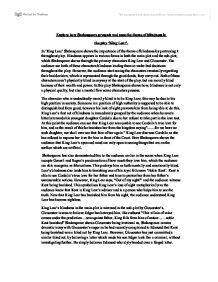 Hamlet essay on his character

Explore how Shakespeare presents and uses the theme of blindness in the play 'King Lear'. In 'King Lear' Shakespeare shows the importance of the theme of blindness by portraying it throughout play. Blindness appears in various forms in both the main-plot and the sub-plot; which Shakespeare shows through the primary characters King Lear and Gloucester. The audience see both of these characters blindness leading them to make bad decisions throughout the play. However, the audience start seeing the characters eventually regretting their bad decision, which is represented through the good deeds, they carry out. Both of these characters aren't physically blind in anyway at the start of the play, but are morally blind because of their wealth and power. In this play Shakespeare shows how, blindness is not only a physical quality, but also a mental flaw some characters possess. The character who is undoubtedly morally blind is to be King Lear; this may be due to his high position in society. Someone in a position of high authority is supposed to be able to distinguish bad from good; however his lack of sight prevents him from being able to do this. King Lear's first act of blindness is immediately grasped by the audience when he reacts bitterly towards his youngest daughter Cordelia due to her refusal to take part in the love test. ...read more.

The audience witness Gloucester making the worst blind mistake, when he says, "Go to say nothing...I will look him and privily relieve him...be note perceived him..." At this point in the play Shakespeare shows Gloucester's good nature to be loyal to King Lear as he wants to bring him into his household from the storm, however Shakespeare also shows Gloucester's stupidity and blindness, as only the audience can see that Edmund will go and tell Goneril and Regan about his father's actions because he is immoral. Even though Gloucester doesn't see or think of this, the audience easily sense this blind action of Gloucester's will lead to disastrous consequences. The unfortunate consequences of Gloucester's stupidity leads to the most shocking incidence in the play when Gloucester gets blinded physically by Goneril and Regan after they have found out he has been loyal to their father. The darkest point of the play is the incidence of Gloucester getting blinded, this can be interpreted in two ways, and the most important one is the audience see how cruel and evil Regan and Goneril can be. The audience witness this when Goneril says "Pluck out his eyes," Which indicates to the audience she has no heart. However the audience also see how evil Regan is after Goneril has left, as she decides to take Gloucester's other eye herself, as the locality towards Gloucester stops the servant form doing so. ...read more.

Ironically, if the audience look right at the start of the play they can see this clearly in the first scene, when Goneril says her love for him is "dearer than eyesight" and shortly afterwards, when Cordelia refuses to play this "love-game," Lear says to her, "Hence and avoid my sight" He's telling her to get out of his sight, Shakespeare shows this cleverly as the audience know if Cordelia left there would be difficulty for King Lear which is similar as to when Kent tells Lear after the King banishes him, "See better, Lear, and let me still remain", once again the audience can see if Kent left Lear, he will find it hard without him, soon after Kent and Cordelia leave, Lear goes mad because he is "blind" and does not see or understand the truth. On the other hand Gloucester loses his eyesight literally because he is loyal to King Lear, so therefore studying the pattern of language in relation to blindness and madness shows the structure of the double plot that shapes the themes of the play. Therefore, I think Gloucester's blindness in the play symbolises the figurative blindness of both Lear and Gloucester. As I believe only when Gloucester goes blind and King Lear goes mad they realize how wrong they were about their children and King Lear about Kent. Both men were blinded to the love and loyalty of their truthful children whom they banished and in blindness made their wicked children their heirs. ...read more.