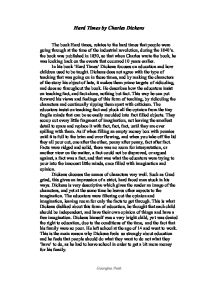 Hard Times by Charles Dickens The book Hard times, relates to the hard times that people were going through at the time of the industrial revolution, during the 1840's. the book was published in 1850, so that when Charles wrote the book, he was looking back on the events that occurred 10 years earlier. In his book 'Hard Times' Dickens focuses on education and how children used to be taught. Dickens does not agree with the type of teaching that was going on in those times, and by making the characters of the story his object of hate, it makes them prime targets of ridiculing, and does so throughout the book. He describes how the educators insist on teaching fact, and fact alone, nothing but fact. This way he can put forward his views and feelings of this form of teaching, by ridiculing the characters and continually ripping them apart with criticism. ...read more.

Dickens chooses the names of characters very well. Such as Grad grind, this gives an impression of a strict, hard faced man stuck in his ways. Dickens is very descriptive which gives the reader an image of the characters, and yet at the same time he leaves other aspects to the imagination. The educators were filtering out the opinion and imagination, leaving room for only the facts to get through. This is what Dickens disliked about this form of education, he thought that each child should be independent, and have their own opinion of things and have a free imagination. Dickens himself was a very bright child, yet was denied the right to education, due to the conditions of the time, and the fact that his family were so poor. He left school at the age of 14 and went to work. ...read more.

During the Victorian times people had a very dim view of education, they did not think it was that essential for children to learn, however in the Victorian times it all came down to your social class. If you were upper class you would have had an education, however if you were lower class you would be considered very lucky if you went to school and even then you would have hat to have left school early to work to get that extra bit of money for the family. I thin these views existed because people had no idea of the importance and it all came down to your social class, also children were ill treated and expected to be seen and not heard. These views of education are very wrong as it is now important especially as we have more rights, and people are respected more. ?? ?? ?? ?? Georgina Peak ...read more.