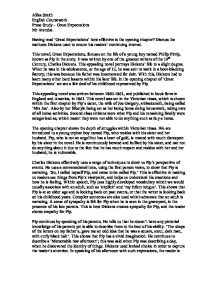 Having read Great Expectations how effective is the opening chapter? Discuss the methods Dickens used to ensure his readers continuing interest.

Having read 'Great Expectations' how effective is the opening chapter? Discuss the methods Dickens used to ensure his readers' continuing interest. This novel, Great Expectations, focuses on the life of a young boy named Philip Pirrip, known as Pip in the story. It was written by one of the greatest writers of the 19th Century, Charles Dickens. This appealing novel portrays Dickens' life to a slight degree. When he was in his adolescence, at the age of 12, he was sent to work in a boot-blacking factory; this was because his father was incarcerated for debt. With this, Dickens had to learn many other hard lessons within his later life. In the opening chapter of 'Great Expectations' we see a fair deal of his childhood represented by Pip. This appealing novel was written between 1860-1861, and published in book form in England and America, in 1861. This novel was set in the Victorian times, which is shown within the first chapter by Pip's sister, the wife of Joe Gargery, a blacksmith, being called 'Mrs Joe'. Also by her lifestyle being set as her being home doing housework, taking care of all home activities. ...read more.

He tells us that he doesn't have any pictorial knowledge of his parents yet is able to describe them to the best of his ability. 'The shape of the letters on my father's, gave me an odd idea that he was a square, stout, dark man, with curly black hair'. This shows that Pip has a vivid imagination. He continues to describe a 'Memorable raw afternoon'; this was said when Pip was describing a day, when he discovered the identity of things. Dickens used lexical choice in order to capture the reader's attention. In speaking of his afternoon with such expressions, the reader is able to question what happened to Pip on that afternoon. These examples of methods, makes the reader become more engaged in the novel, wanting them to read more. As the main character is described as someone who is deserving of love, comfort and a sense of belonging, in the sight of a reader, he is portrayed as someone who requires compassion. However, the convict, Magwitch, is first depicted as the total opposite. He is shown as rough, coarse and brusque. ...read more.

Poverty, fear, abuse and crime and the law, are the main themes for the first chapter. This is evident, even in the short glimpse that we get from within this chapter, with the understanding of Pip's life. Being without his parents, and having to live with his sister and brother-in-law, and having been harassed by the convict, Magwitch, who seems to have escaped from jail, are just two examples that show those themes. In conclusion, I believe that the opening chapter of Great Expectations is very effective. Not only is this one of the most exhilarating novels that a person could read, but it is one to recommend too. Due to the narration of Pip, the opening chapter would make readers very intrigued, wanting to know more about 'what's going to happen next' as well as Pip's life and what his outcome in life is. The choice of language as well as the literary terms used such as metaphors, similes and dramatic tension, would draw one's attention and keep them fascinated throughout the entire book. ?? ?? ?? ?? Alika Smith English Coursework Prose Study - Great Expectations Mr Arendse ...read more.