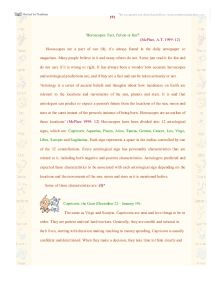 Horoscopes: Fact, fiction or fun? Horoscopes are a part of our life, its always found in the daily newspaper or magazines. Many people believe in it and many others do not.

(9) 'Horoscopes: Fact, fiction or fun?' (McPhee, A.T. 1999: 12) Horoscopes are a part of our life, it's always found in the daily newspaper or magazines. Many people believe in it and many others do not. Some just read it for fun and do not care if it is wrong or right. It has always been a wonder how accurate horoscopes and astrological predictions are, and if they are a fact and can be taken seriously or not. 'Astrology is a series of ancient beliefs and thoughts about how incidences on Earth are relevant to the locations and movements of the sun, planets and stars. It is said that astrologers can predict or expect a person's future from the locations of the sun, moon and stars at the same instant of the person's instance of being born. Horoscopes are an outline of these locations.' (McPhee 1999: 12) Horoscopes have been divided into 12 astrological signs, which are: Capricorn, Aquarius, Pisces, Aries, Taurus, Gemini, Cancer, Leo, Virgo, Libra, Scorpio and Sagittarius. Each sign represents a space in the zodiac controlled by one of the 12 constellations. Every astrological sign has personality characteristics that are related to it, including both negative and positive characteristics. Astrologers predicted and expected these characteristics to be associated with each astrological sign depending on the locations and the movements of the sun, moon and stars as it is mentioned before. Some of these characteristics are: (1)* Capricorn, the Goat (December 22 - January 19): The same as Virgo and Scorpio, Capricorns are neat and love things to be in order. They are patient and real hard workers. Generally, they are careful and rational in their lives, starting with decision making reaching to money spending. Capricorn is usually confident and determined. When they make a decision, they take time to think clearly and (10) deeply about all the alternatives before settling their mind on the one they think is right. ...read more.

� Parsimonious (shielding of the proposed in entities or interpretations) � Blessing useful (and describes and the phenomena explain and to get lucky) � The test met for experimental falsifiable (20) � Leaning to dominated him, and the frequent attempts � Dynamic his the correction met for (just as entering of changes on the new statements is complete the discoverer) � The graduations (to all previous theories realize and increases) � Timed (acknowledges that he already blessing is not correct instead of confirmation and the certitude) From the stars and leaning to proofs In domain of the flag and the realization enables from it, the offered requests from where the principle and after that, when the matter hangs the attempts, in reality of the matter. In flags false, your weakness is allegations not normal who lack of enough does not believe for proofs the introduction. Important matter for clear reasons raved -- If was theoretical proofs do not lean to followed the realization be possible from her experimental, and not there any road the allegation that any tie with the reality have fun. Carl Sagan, which the phrase formed "that the requests exclusions his proofs require of exclusions". Raved the practical aspect means that if the request was not strange very or other than offence in comparison with what introduces him in the verb about the scientist, and after that many proofs needed to accept of the allegation are blessing likely that accurate formation. From last aspect, when the request conflicts with very on face of the specification the things which we knows in the verb about the scientist, then that we the plenty needs to very from proofs status the accepting in him. That is because if this request was accurate, then a lot of the last believed which takes her to granted does not be possible that accurate formation. Harm was that believed good in supporting from the attempts and the (21) ...read more.

Let the limits of your mystical and supernatural beliefs be revealed .. !! 1. Your friends are excited to talk to a fortune teller. Do you: a) Tell them they're pathetic & ditch them to see a movie. b) Go along, but just to keep company. (34) c) Race to the fortune teller yelling, " How rich will I be? " 2. Your mom says she dreamt of the winning number for the TV competition. Do you: a) Tell her to switch to light healthy dinners instead. b) Force her to write them down then phone the competition's hotline RIGHT AWAY ! c) Ask her to sleep & dream again to see if your score is high enough to pass. 3. Your teacher surprises your class with a pop quiz. Do you: a) Faint ! b) Stare really hard at the nerd's head hoping the mind-reading thing will work. c) Smile as your magic 8 ball reads WITHOUT A DOUBT ! 4. Your sign says you'll fall in love with your perfect match. Do you: a) Laugh out loud ! It's THE one or nothing for you. b) Walk past the hottest spots in case you might run into your future. Partner, (35) c) Go & grasp the attention of that one you've been drooling over. Results .. !! # Mostly A's : You're not that into the whole supernatural powers trend. Your motto is: " If I can't see it, it's not there ! ". You're more of the realistic type of person but keep on open-minded... you might run into something extraordinary ! # Mostly B's : You enjoy reading your sign & playing with the magic 8 ball. For you, life is too short to be taken seriously; you love having fun & it wouldn't hurt to enjoy a little magic too !! # Mostly C's : Addiction .. Addiction .. Addiction !! You can't get enough of zodiacs & dream interpretation books. It's great that you have that mystical side, but save some time for the earthly citizens ! ?? ?? ?? ?? - 1 - ...read more.