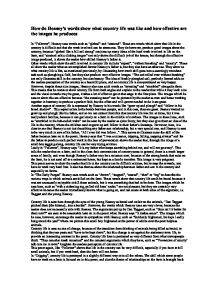 How do Heaney's words show what country life was like and how effective are the images he produces In "Follower", Heaney uses words such as "globed" and "strained". These are words which show that life in the country is difficult and that the work involved can be strenuous. They do however, produce good images about the country, because "globed like a full sail strung" conjures up many ideas of the hard work involved in life on the farm, and "strained at his clicking tongue" not only shows the difficult job of the horses, but through the effective image produced, it shows the reader how skilled Heaney's father is. Other words which show the skill involved in country life include "expert", "without breaking" and "exactly". These all show the reader what an accomplished farmer Heaney's father is, but they also have another use. They show us what country life is like, as mentioned previously, by illustrating how much skill goes into a seemingly mundane task such as ploughing a field, but they also produce very effective images. "The sod rolled over without breaking" not only illustrates skill in the country, but also beauty. ...read more.

It also has themes about the relationship between father and son in the country and especially on farms. In "The Early Purges" Heaney uses words such as "drown", "trapped", "snared", "shot" or "tug" to describe the various ways in which animals are killed on the farm. These words show that country life could be brutal because it was not necessarily enjoyable to kill these animals, but it was something that had to be done. The images which he uses here, such as "with a sickening tug, pulled old hens' necks." are not pleasant, but they are certainly very effective because the reader immediately knows what is going on, and can relate to both sides of the argument, i.e. Taggart and the young Heaney. Country life is seen here through the eyes of the young Heaney as brutal and unfair on the animals, "Dan Taggart pitched them [the kittens]...into a bucket". However, the words which Heaney uses are very clever, because the reader does not necessarily side with Heaney. The arguments put up by Dan Taggart, such as "Sure isn't it better for them now?" are seen to be reasonable later on in the poem when Heaney says "It makes sense". ...read more.

The continuation of farming from Heaney's grandfather, to Heaney's father, "the old man could handle a spade. Just like his old man" shows the reader that country life is very family orientated, and professions are often carried down from father to son. The images of Heaney's father being taught to dig by his father are very powerful and effective, because they show the reader the strong bonds between people on a farm, and in country life generally. The last line, "The squat pen rests. I'll dig with it." show that in the country, it is often expected that people like Heaney will follow in their father's footsteps, but Heaney is seen here to choose to be a writer. The image of Heaney digging out his memories with pen are very effective because the reader can visualise the likeness between poetry and farming. However, the image is also a surprise, because Heaney says in "Follower" that he wants to be like his father, but here he has changed his mind. This poem, like the other two, has main themes, and they are very similar to the others. It is all about the hard work involved in running a farm, the relationship between the father and son, and the expectation that profession and skills will be carried on throughout the family. ...read more.