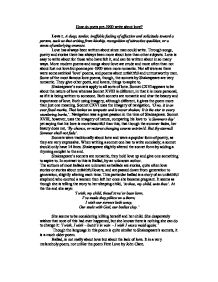 How do poets pre-1900 write about love? Love n. A deep, tender, ineffable feeling of affection and solicitude toward a person, such as that arising from kinship, recognition of attractive qualities, or a sense of underlying oneness. Love has always been written about since man could write. Through songs, poetry and stories there has always been more about love than other subjects. Love is easy to write about for those who have felt it, and can be written about in so many ways. More modern poems and songs about love are crude and more often than not about lust not love but poems pre-1900 were more romantic. Not all were as there were some satirical 'love' poems, and poems about unfaithful and untrustworthy men. Some of the most famous love poems, though, the sonnets by Shakespeare are very romantic. They give other poets, and lovers, things to aspire to. ...read more.

When writing a sonnet one has to write concisely; a sonnet should only have 14 lines. Shakespeare slightly altered the sonnet form by adding a rhyming couplet to the end. Shakespeare's sonnets are romantic, they hold love up and give one something to aspire to. In contrast to this is Ballad, by an unknown author. The authors of most ballads are unknown as ballads are stories, quite often love stories or stories about unfaithful lovers, and are passed down from generation to generation, slightly altering each time. This particular ballad is a story of an unfaithful shepherd who courted a women then left her once she became pregnant. It seems as though she is telling the story to her sleeping child, 'to thee, my child, unto thee'. At the the end she says: 'I wish, my child, thoud'st ne'er been born, I've made they pillow on a thorn; I wish our sorows both away, Our souls with God, our bodies clay.' ...read more.

In the third verse he tells that though he loves her, and he thinks that she loves him aswell, that they cannot be together but he will never love another: 'My heart has left it's dwelling-place, And can return no more.' The language is clear and direct, as is its verse form, perhaps to capture the immediacy and simplicity of the feelings. This poem is most likely about John Clare's own experiences. His background meant he could not marry the daughter of a wealthy farmer as he wanted to. He became mentally ill also. Love has always been a popular subject of poems but poets approach it in a diversity of ways. From Shakespeare's romantic sonnets to John Clare's sad and simple love poem. Though they have their differences, they are all dealing with the human emotion of love, with its wonders and its sadness. ...read more.