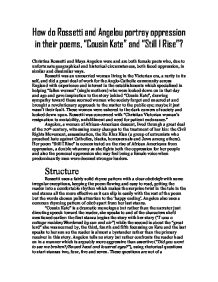 How do Rossetti and Angelou portray oppression in their poems, &quot;Cousin Kate&quot; and &quot;Still I Rise&quot;?

How do Rossetti and Angelou portray oppression in their poems, "Cousin Kate" and "Still I Rise"? Christina Rossetti and Maya Angelou were and are both female poets who, due to unfortunate geographical and historical circumstances, both faced oppression, in similar and dissimilar ways. Rossetti was an unmarried woman living in the Victorian era, a rarity in its self, and did a great deal of work for the Anglo-Catholic community across England with experience and interest in the establishments which specialised in helping "fallen women" (single mothers) who were looked down on in that day and age and gave inspiration to the story behind "Cousin Kate", drawing sympathy toward these scorned women who society forgot and sneered at and brought a revolutionary approach to the matter to the public eye; maybe it just wasn't their fault. These women were ushered to the dark corners of society and looked down upon. Rossetti was concerned with "Christian Victorian woman's resignation to mutability, unfulfilment and need for patient endurance." Angelou, a woman of African-American descent, lived through a great deal of the 20th century, witnessing many changes to the treatment of her kin: the Civil Rights Movement, assassination, the Ku Klux Klan (a group of extremists who preached hate against Catholics, blacks, homosexuals and Jews among others). ...read more.

Angelou mainly uses the imagery of nature and wealth in "Still I Rise". After each rhetorical question, Angelou adds to the bait by informing the readers of why you would or should take offence to her actions, mainly relying on the fact that jealousy compels many to say something they regret but thought in the first place as every enforced provocation refers to the confidence Angelou has through hypothetical wealth i.e. "Does my haughtiness offend you? /don't' take it awful hard / 'Cause I laugh like I've got gold mines / Diggin' in my own back yard." These also refers to the rather ugly and shaming historical reference that the white man used to own everything with the black slaves working beneath him to accumulate his wealth while he sat upon high and so it subliminally asks a provocative question: after all these years of progress from oppression, does it still anger the white man to know that the black man is his equal? Or even more so of women, naturally vain and criticising of her fellows: how would the white women take it if "my [Angelou's] sexiness upset[s] you"? These questions accuse the white people and many others of sticking to the traditional mindset of staying in your allocated place in society, much like Rossetti's fallen women. ...read more.

Angelou is literally loud and proud, using rhetorical questions to provoke the reader into looking deep down and examining their beliefs and whether or not they coincide with their morals, shaming them into changing themselves. Angelou goes on about how the white population should be ashamed of their actions and how it is so wrong that we have not evolved past that mindset and yet she seems to beat the reader with a stick and then step upon them, subtly threatening that the African Americans also had the power to do the same. Angelou is more effective in her approach to combating oppression due to her spirit, assuredness and almost rude aggressiveness but many people will argue that Rossetti is more appealing as it leaves the reader thinking productively rather than punishing themselves for letting their thoughts and opinions go untamed and this is because Angelou, whether subconsciously or not, has almost oppressed the reader into thinking in her own mindset in which she believes is correct. Many, including myself, that equality is best but when the idea is drilled into your head as it has done in "Still I Rise", it starts to become the very thing it was fighting, threatening that, almost with a military-like force, the white population will 'get a taste of their own medicine'. ...read more.