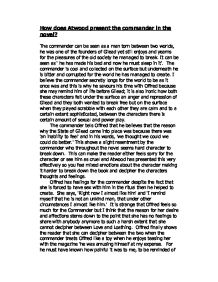 How does Atwood present the commander in the novel?

How does Atwood present the commander in the novel? The commander can be seen as a man torn between two worlds, he was one of the founders of Gilead yet still enjoys and yearns for the pleasures of the old society he managed to break. It can be seen as ' he has made his bed and now he must sleep in it'. The commander is cool and collected on the surface but underneath he is bitter and corrupted for the world he has managed to create. I believe the commander secretly longs for the world to be as it once was and this is why he savours his time with Offred because she may remind him of life before Gilead; it is also ironic how both these characters felt under the surface an anger ...read more.

Offred has feelings for the commander despite the fact that she is forced to have sex with him in the ritual then he helped to create. She says, 'Right now I almost like him' and 'I remind myself that he is not an unkind man, that under other circumstances I almost like him.' It is strange that Offred feels so much for the Commander but I think that the reason for her desire and affections stems down to the point that she has no feelings to share with anybody anymore to such a harsh extent that she cannot decipher between Love and Loathing. Offred finally shows the reader that she can decipher between the two when the commander treats Offred like a toy when he enjoys teasing her with the magazine 'he was amusing himself at my expense. ...read more.

Atwood presents him as physically weak and pathetic to show just how much the society has run him down and his power has been smashed. This lack of pride that he has created for himself due to his role in the creation of Gilead helps towards his overall mental downfall and using Offred for company can be seen to the reader as a mental cry of help by or a way of escape. Atwood portrays the Commander as a self - minded, oblivious creature using animal imagery such as, 'ears flared back' when Offred meets the commander for the first time as if they are going to combat. Atwood has created the character as a commander as a hate/sympathy figure in the book and depending on the reader's personality the commander will either take a place in the reader's heart of be a figure of hatred. ...read more.