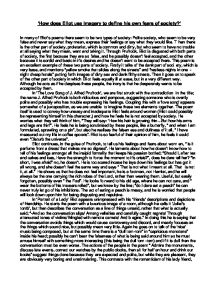 'How does Eliot use imagery to define his own fears of society?'

'How does Eliot use imagery to define his own fears of society?' In many of Eliot's poems there seem to be two types of society: Polite society, who seem to be very false and never say what they mean, express their feelings or say what they would like. Then there is the other part of society, proletariat, which is common and dirty, but who seem to have no trouble at all saying what they mean, want and taking it. Through Prufrock, Eliot is disgusted with both parts of society, the first because they are so false, and he possibly doesn't feel accepted, and the other because it is sordid and basic in it's desires and he doesn't want to be accepted there. This poem is an excellent example of these two parts of society. Firstly it talks of the dank part of society, which is very base, and mentions "yellow smoke that slides along the streets" and "restless nights in one-night cheap hotels" putting forth images of dirty s*x and dank filthy streets. Then it goes on to speak of the other part of society in which Eliot feels equally ill at ease, but in a very different way. Although he acts as if he despises these people, the irony is that he desperately wants to be accepted by them. In 'The Love Song of J. Alfred Prufrock', we are first struck with the contradiction in the title; the name J. ...read more.

Even the people are twisted; a prostitute stands in the light of a door, "which opens on her like a grin", not a smile, a grin, suggesting something filthy and sneaky. Her dress is torn and stained, which suggests that she has been used, possibly for violent s*x. "You see the corner of her eye / twists like a crooked pin", this again suggests violence; she has been beaten. These are the images that Eliot gives us of the rougher side of society, that they are dead and rotten "Like the world has thrown up / the secret of it's skeleton". "A broken spring in a factory yard, rust that clings...hard and curled and ready to snap", this is a good description of the underbelly of society, that it has gone off, but it is not soft and cultivated like polite society, it has survived and therefore become stronger, but it is battered and worn. "remark the cat which flattens itself in the gutter...I have seen eyes in the street / Trying to peer through lighted shutters", This shows that people are afraid, they have been beaten down so therefore flinch at the smallest movement. The cat is hiding incase it is going to get kicked and the eyes are looking to see if those foot steps are the ones that will be coming up the stairs soon. It is a poem filled with fear. Eliot expresses sympathy for people who are stuck in that sort of life with no way out, while he feels disgust at the falseness and pettiness of polite society, they do not know how lucky they are. ...read more.

Even when there is supposed to be beauty and refinement, Eliot portrays an element of falseness in the beauty. While the poem starts talking about a "burnished throne" it then shows that it is all a veneer, false "lurked her strange, synthetic perfumes...troubled, confused". He talks of changing beautiful things; Philomel was beautiful and was changed to a nightingale by the "barbarous king / so rudely forced" as she was raped and had her tongue cut out. Then she "filled all the desert with inviolable voice", it was a beautiful voice, but she could not be understood, "Jug jug to dirty ears". This is like Eliot's view of polite society, they say pretty things, but they don't mean anything, are worthless. Again Eliot gives references to madness (his 1st wife suffered from depression and was institutionalised, so we know Eliot had personal experiences of this) He shows the speech of someone who is obviously mentally ill " my nerves are bad tonight... are you alive, is there nothing in your head?" This the quickly changes to common speech (possibly Eliot feels that there is not so much of a leap between the two which is why he doesn't like common society), In these sentences there are references to s*x, adultery and the hardship of their lives, showing that Eliot feels this is all they talk of. In the 'Fire Sermon the Nymphs' are a symbol of nature and joy, "the nymphs are departed" goes to show that there is no pure joy left, only sullied satisfaction. ...read more.